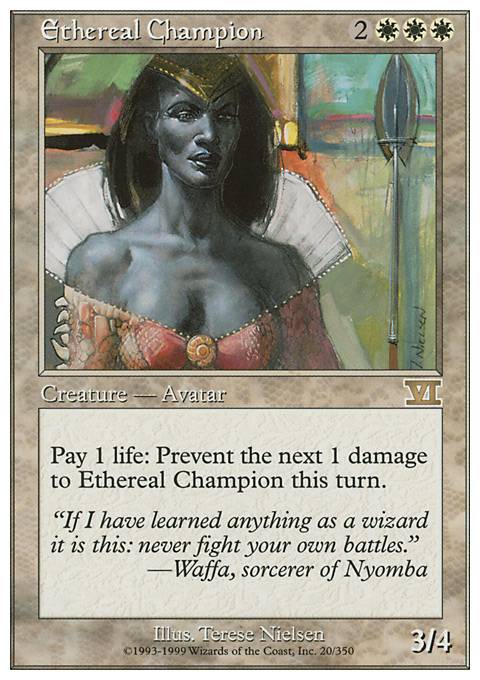 Pay 1 life: Prevent the next 1 damage that would be dealt to Ethereal Champion this turn.

Trade Caravan hits me for HOW much?? V2.0
by AzureOctive 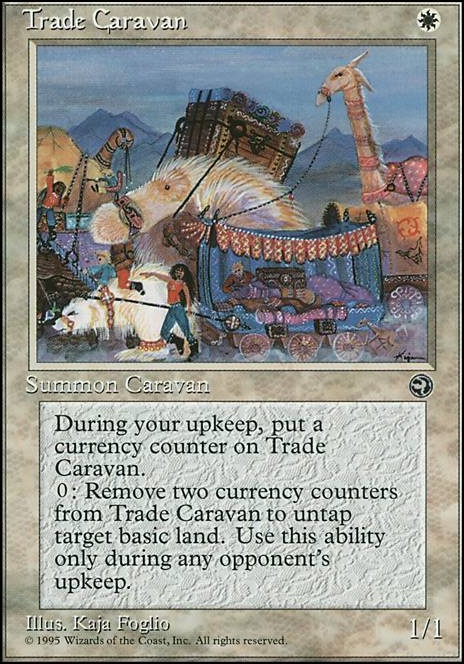 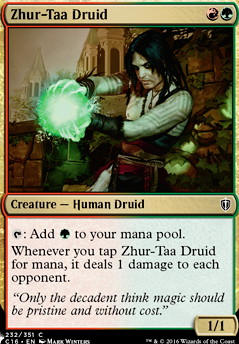 Thinking about something like Ethereal Champion as a Second Chance enabler. Anything in these colors that can help me engineer my life total would do it, but the Champion is Terese Nielsen.Protective Sphere is more the style of the deck, it's an enchantment, has Hanna in the art, and just sounds right, but it costs mana with each use. That being said it might be useful leading up to the combo

Other than these two, I haven't found any white or blue cards that have "Pay 1 life:" in their text. Any suggestions?

You have an absurdly low sorcery-instant count for a deck with Noyan Dar, Roil Shaper as the commander. I think you're at the point where you should consider Medomai the Ageless or Brago, King Eternal as potential commanders.

You also have ton of creatures for a deck with Enduring Renewal.

If you have Mistmeadow Witch, you should be playing Eldrazi Displacer.

Your deck is about 20-22 lands short of being playable.

Staff of Domination is a good way to draw your deck when you have an arbitrarily large amount of mana, and it's a good mana sink even without infinite combos.

Archeomancer is cheaper than Mnemonic Wall. Play both if you're playing one.

Spellbook and Graceful Adept are not worth card slots. Play Expedition Map if you really want a second copy of this sort of effect.

It's a little hard to play Cruel Control when you don't have Cruel Ultimatum.

This seems like the wrong deck for Forced Fruition, which is possibly the best mill spell in the format. You don't really kill by milling people out (unless you're going infinite, which is an entirely different situation), and you don't punish them for drawing cards.

Needs more Mind's Desire, since you have ways to generate an unlimited storm count.

I'm not seeing many ways to abuse all your creatures that untap whenever something enters the battlefield (besides Retraction Helix). You're too light on tutors to be playing cards that are useless outside of a couple specific combos. This also applies to cards like Enchanted Evening.

I don't understand why you're playing Library of Leng. Play Nephalia Academy if you're worried about forced discard spells.

VesuvanDoppelbanger also happens to be the current best name on tappedout. :P

With the amount of life-total exchanging you have going on here, I'd recommend the following cards that have the ability to pay a single life as the activation cost an ability such that you can just decided to have exactly 13 life whenever you want.

As a bonus, Underworld Coinsmith might be a nice touch because of what this deck is trying to do.

The following are cards I disagree with for this deck.

Good luck with your build.