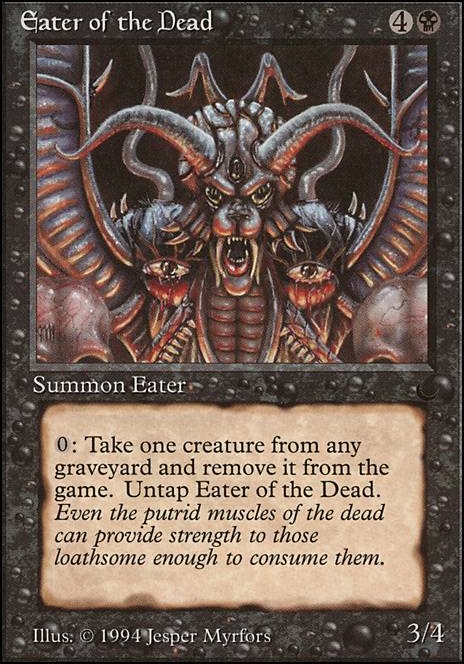 Eater of the Dead

(0): If Eater of the Dead is tapped, untap it and remove target creature card in a graveyard from the game.

Phenax, God of Deception
by Maxman224

Rouges Are We
by Prince_0f_Parties

Eater of the Dead Discussion

I am looking to add Eater of the Dead, Tree of Perdition, Laboratory Maniac, Doomsday, Thassa's Oracle and also some stuff with transmute.

I'm open to all suggestions especially for how to fix the mana and speed.

Phenax, God of Deception and Eater of the Dead infinite mill as long as creatures in some graveyards.

Hinder then Tunnel Vision or Hinder and knowing a card near the bottom of their library.

I updated the list to include Eater of the Dead. I removed Aether Gale for it. Overall, much better.

I could not find room for Keening Stone. I feel like if I cut any more creatures, tutors, combo pieces or toolbox cards to stay alive I will be watering down the deck.

Eater of the Dead has the potential to chain off endlessly for the win.

Eater of the Dead should be your best friend. mill yourself a little, and he just goes off.