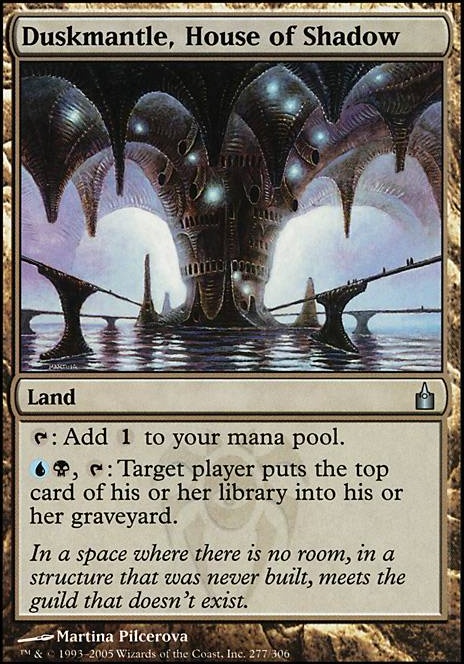 , : Target player puts the top card of their library into their graveyard.

I took that to mean, referencing a specific non-Legendary Land, like Skophos Maze-Warden, not simply referencing like a basic land type, or even "basic Forest" like Nissa, Vastwood Seer Â Flip.

I did this with both a land I think should be legendary and one that certainly isn't.

If a player would lose life, instead that player puts that many cards from the top of his or her library into his or her graveyard.

Whenever a card enter the graveyard from an opponent's graveyard, you may untap Duskmantle, House of Shadow.

Then a clearly non-legendary land:

Players can only cast noncreature spells during their own turn.

Spells a your opponents cast cost for each land you control named Gavony Township.

I'd like a common which cares about either number of cards in exile or in a library.

Zombie bois, the Jack Of All Trades.

Trying to accommodate so many mechanics in a deck can be a hindrance. In my opinion, mill is pretty weak in multiplayer EDH because there are a ton of cards that can recover cards from the yard or just shuffle back in. On top of that, most mill cards only target one player. If I were you I would tune the deck to be mostly mill or take out most of the mill cards aside from maybe Undead Alchemist. If you want to go into mill, it is a go big or don't go at all kind of thing. If you want to go mill you should add cards like Mindcrank, Mind Funeral, Sire of Stagnation, Jace, Memory Adept, Nephalia Drownyard, Duskmantle, House of Shadow, and Jin-Gitaxias, Core Augur as well as cards that can copy spells on the stack as to target multiple players similar to Naru Meha, Master Wizard, Echo Mage, and Meletis Charlatan.

I'm also not a big fan of Doubling Cube in this deck as I don't see it being very useful most of the time. I think it could be replaced by a better mana rock or mana multiplier like Chromatic Lantern, Thran Dynamo, Caged Sun, Gauntlet of Power or just a different card all together if mana isn't usually an issue. The same goes for Fabricate. It is definitely a good card, but you do not have enough targets to justify running it to me. I would run Diabolic Tutor over it as it only costs 1 more mana and can tutor for anything. I don't see a lot of recursion to be running Entomb. If you are just trying to thin your deck then run Buried Alive, though, again, none of your creatures benefit from sitting in your graveyard and you only a couple of ways to get them back out.

The land base looks pretty solid. I would suggest you try to pick up a Watery Grave.

Not sure how you or your play group feel about infinite combos, but adding Triskelion to the deck along side the Mikaeus, the Unhallowed you have is infinite damage to everyone provided no one has a way to interrupt it.

If running all these mechanics are fun for you then keep it as is; I'm not trying to tell you how to have fun. My suggestion to you is that you try to focus your deck to do only a few things because when you run all these mechanics you spread yourself pretty thin and maybe you are trying to get a bunch of zombies and you draw something you don't need as it is for a different mechanic. Running multiple cards that do the same thing is very advantageous in EDH for consistency. An example is if you want to run Animate Dead, you should also run Dance of the Dead and Necromancy. They do the same thing and increase your chance of getting a card that has that effect.

If you want, you can check out my UB Zombie deck, Zombies for days. It creates and recycles zombies. It might give you some ideas. There are also a lot of other decks you can find on this site or can google and take inspiration from.

naturesnake420 I think your list is interesting. You took a different take on lantern control which is neat. My list is very honed on a specific play-style stemming from two thoughts.

From my experience Pyxis and ghoulcaller's end up not just being the MVPs of the deck, but are rather essential for my version. Cards that you see as dead in hand, end up doing a mass amount of work for my play-style.

I'm going to suggest at least to include Duskmantle, House of Shadow and Nephalia Drownyard as options to remove problem cards from the top of opponent's libraries. You should be able to fit these lands in your version.

As lantern control, your objective is to prevent opponent's from drawing things they want. in example, if they are mana flooded then only let them draw lands. While i feel you can achieve this, it may be difficult.

Whenever a soldier you control attacks it gets +1/+1 and vigilance.

One good leader is all it takes to turn the weak into the strong.

Non-token warriors you control get +1/+0 and have haste

From the drive of battle he stirs his men into a truly terrifying force.

Create a series of lands similar to the Guild lands (Sunhome, Fortress of the Legion, Duskmantle, House of Shadow) for another plane.

Also for flavorSvogthos, the Restless Tomb

Since your commander is so expensive, I feel like you could benefit from a few more lands to ensure you can get it out more consistently. In addition, there are many powerful utility lands that would synergize well with Muldrotha, basically playing the same role as a spell. Mirrorpool could help copy powerful creatures, Blighted Woodland and Myriad Landscape could both help you ramp, Field of Ruin and Ghost Quarter could blow up troublesome lands, and there are plenty of cycle lands in your colors. In addition, there are some great lands that can mill you, letting you get your engine started. Nephalia Drownyard and Duskmantle, House of Shadow can both mill anyone, and Sequestered Stash lets you mill yourself and get back an artifact, though that part could actually be bad given Muldrotha's ability.

A higher land count could help support some powerful cards that give extra land drops, namely Exploration and Oracle of Mul Daya. Mox Diamond is a great piece of fast ramp that also synergizes well with your commander, since the discarded land can be replayed with its ability.

I feel like you may be running too many weak 2-cmc mana rocks and not enough actual gas. Ramping out your commander early is fine if it actually does something, but Muldrotha needs a self-mill outlet in order to do anything.

Finally, I think Eternal Witness should definitely find a place in the mainboard, since it can help recur things when you don't have access to your commander. I also really like Daedalus19876's suggestions of reanimation spells, since not only can they let you cheat out bombs early, they also give you the ability to play two creatures from your graveyard on a turn, opening up combo possibilities. Speaking of combos, Triskelion can kill the table together with Mikaeus, and given a lot of mana (which this decks looks like it can easily generate), you could cast your commander and both of them from your graveyard in a single turn.

What are your thoughts on Duskmantle, House of Shadow?

Also Malicious Affliction isn't modern legal, it's from one of the commander sets.

Caldera Lake seems like a pointless addition. It enters tapped and can only produce the 2 colors you're splashing at the cost of a life. I wouldn't add Caldera Lake, big drawbacks without much payoff.

As for the Demons. If you really want to go for a tribal deck, you're gonna have to remove most (If not all) creatures that don't share your tribal creature type. (I managed to make a deck that works only using 20 creatures (21 with Commander) that were only tribal correlated, so it is possible for you to try)

Path of Ancestry (You will not be able to scry unless you play conspiracy. May I suggest changing Marchesa for Sol'kanar the Swamp King? Yes you lose the Dethrone and being able to return a card by default, but a Tribal deck should be lead by a tribal commander. Your choice entirely)

City of Brass (I don't like it, as it will still deal damage even with Chromatic Lantern in play, but your choice)

Duskmantle, House of Shadow (Put a demon into your gy, reanimate it, or the most obvious approach)

Feel free to make some changes, but these cards are cheap and will help your mana base (If you don't like Bojuka, replace it with a Swamp.)