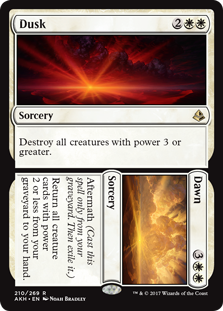 Destroy all creatures with power 3 or greater.

Heyo! My friend has a Doran edh deck, so I'll just throw out suggestions based on what I remember making an impact.

Dusk - good boardwipe that keeps most of you dudes and give you some options later.

Asceticism - I have a bad habit of throwing this into any deck with green. It's nuts to me

Temple of the False God - love/hate relationship with this land. Works better with land ramp

Retribution of the Meek - another boardwipe

Those are just a few ideas, hope this helps.

btw, a card he runs that I like, though it isn't very good is Necropolis . I find the wonky counters to be interesting.

Love the concept! These might interest you: Metallic Mimic , Adaptive Automaton , Stromkirk Condemned , Thirsting Bloodlord , Battle Hymn (gets papa markov out on t3 or t4 assuming you played dudes on t1 and t2), Dusk , Lotus Petal