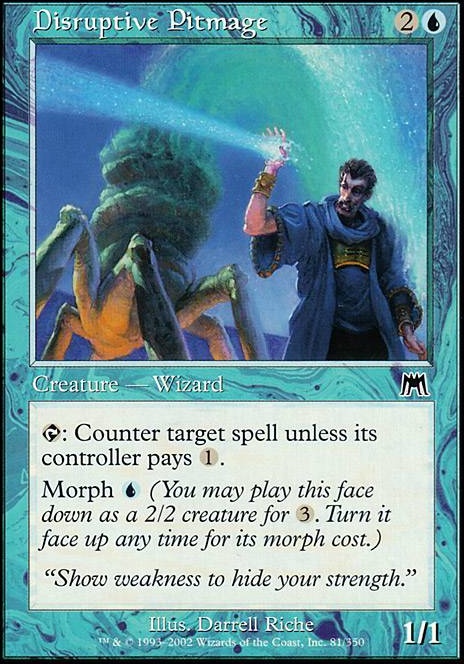 You Just Activated My Trap Card! || Kadena PRIMER
by Hamroids

Love the ideas of the combos! My Kruphix morph deck definitely needs more ways to win. A cheaper (as in dollars) version for the Cloudstone Curio is Tidespout Tyrant , which can also be used for bouncing other people's stuff. Another tutor for the Curio is Trophy Mage , and I like to use Tribute Mage for the Doubling Cube. My favorite morph is Disruptive Pitmage . This card actually gets people, especially in the earlygame.

If you want a few creatures that can counter spells maybe try:

Also, these wizards might help yout sub-themes of copying spells and stealing creatures:

Let me know if there's a specific reason you're using a card I suggested to remove.

Yeah I think I'll skip on the options I mentioned

Rzepkanut: Just to be clear, lands are at even CMC so some whiffing is inevitable (unless there's some landless build in EDH involving Moxes or something that I'm completely unaware off). It might be what you meant by when you mentioned being "hated on" but what I'm concerned about milling; part of my worries originates from Imperial Seal seemingly having a way worse reputation than Vamp. Tut, but that might be a misunderstanding on my part.

Also, I'm currently not quite ready to go the distance with pure nonland oddity; I've currently got ten 2-drops mostly consisting of reactive control cards (e.g. Mana Drain & Darksteel Mutation), since stuff like that might not be useful whenever Yennet reveals them, plus some things that are sufficiently powerful to warrant hardcasting them, e.g. Strionic Resonator & Lightning Greaves. However, for the controlly parts I am considering going with 3 CMC permanent alternatives(e.g. Disruptive Pitmage), but I'm concerned that the deck's ability to respond will be more fragile since permanent removal is IMO typically more common than discarding.

Civilized Scholar  Flip is very good in the deck. loots and untaps. Jace, Vryn's Prodigy  Flip is very similar. lets you cage an extra card every time you loot, Plus if you gave haste on him, you can flip your whole deck provided you have 5 cards in your yard.

Also Spiny Starfish is a pet card of mine. regenerates in blue and can be really annoying as a chump blocker when not caged.

Giant Crab is a great way to protect against pesky removal spells. unless you want to bounce mairsil, in which case Skywing Aven is great.

finally im testing out Disruptive Pitmage it locks people out from casting spells if you have infinite flickers, but sometimes people forget that its out and tap out for a big x spell.

@Squire1 UR isn't particularly good at answering threats once they're on the board, and playing draw-go with Jhoira seems fine. You can just suspend your haymakers on an opponent's end step if you didn't need to counter anything, and most of your threats are going to be so powerful that they won't need much to protect them.

@NickyBolas Here's a list of soft counters I think are reasonable in EDH:

My problem with Mental Misstep is that I always feel relieved to see a target for it, which usually indicates that the answer is too narrow.

Tyler Told Me To Check Out Your Deck

Alright so let's look at the commander first: Rubinia Soulsinger

So basically she is a five mana, three color, poor man's, Mind Control...

And she dies to Doomblade which basically is a testament to how crappy she is.

So what I am gathering from your decklist is that you want a control deck?

Okay so the deck itself looks mainly like you bought a couple of Fat Packs, and thought you could make use of the commons and decided to throw them into a deck. These are pretty terrible, and if you are drawing one card a turn, most of the time everything you draw is never going to impact the board in any significant way.

For example, let's say you get to turn five, and by this point the opponent has some creatures on the board and maybe they even got their commander out, you may have hit all of your land drops + or - one, so what can we expect to hope for at this point? Imagine this scenario and the card you draw is Peek or Yoked Ox or Disruptive Pitmage? Those are just a couple of examples. Lets actually do some math, you draw seven on the first turn, then five cards after that because you are on the draw, so we are 12 cards into your deck + or - draw spells like Ponder and Preordain. Now how many of the cards in your deck are going to even make an impact on the board state on turn five? Nine cards are. That is 1/8th of your deck at this point in the game, which is a 12% chance of drawing something impactful.

How many cards in your deck do you actually want to see past turn one or turn two? In fact, half of the cards in the two drop slot, I wouldn't even want to draw throughout the rest of the game, they are just trash.

This is where we can divulge into the synergies of your deck. What is the goal of the deck? Do the cards in the deck reflect the goal we have in mind?

What is the goal of this deck? The name of the deck has "Control" in it, so I guess it is a control deck? Well we have the shell of a Pillowfort deck in the Enchantment slots, and then we have a bunch of high defense creatures and lame counter creatures, then we got a stack of very situational counterspells. So what are we planning on doing? We have a problem here, we can choose to hold our mana open, or we can choose to lay down our pillowfort enchantments. We can't do both though unless we spread it over the course of many turns. The problem is that you are going to end up holding mana for a counterspell and then wishing you had played the enchantments instead. If we are going to control I think we should pick a road and then stick with it, because half committing only makes this deck weaker.

If you go the pillowfort route, you really need to run Leyline of Sanctity, more Howling Mine effects, and probably more Fog effects. If you go the control route, you are going to need to run Mother of Runes and more Wrath of God and Sunscour effects.

If you pick the direction of your deck and choose a different commander I can help better suggest cards, but I am going to wait for your answer on that one.

P.S. look up any landbase for any Commander deck, you almost never run all basic lands.

(sorry I am referring to Disruptive Pitmage