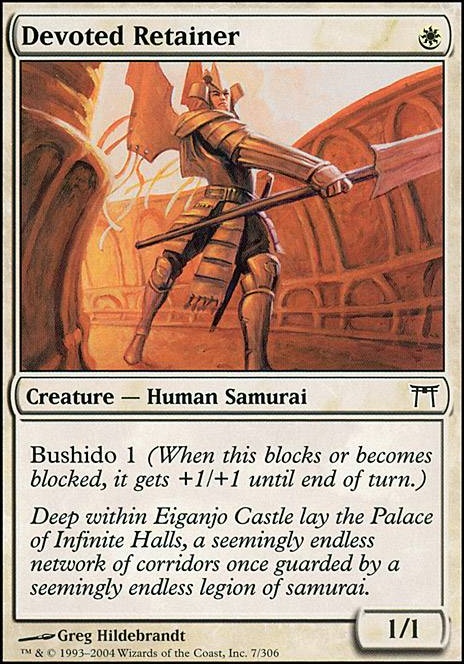 -War-Name Aspirant can be played turn two right after you attack, which makes her a nice 3/2 for only two mana, and* she can't be blocked by most defenders or flimsy tokens.

-Devoted Retainer is a smooth turn 1 drop with that sweet bushido mechanic.

-Boros Recruit is great because he can be cast with either of your mana colors, and has first strike, which can come in handy if he gets blocked right off the bat.

-Legion Loyalist sneaks in 1 damage with haste before your opponent even gets a chance to block, and later on in the game he can give several other of your creatures both first strike and trample.

I love the idea/flavor behind a samurai deck so +1 for that alone :p in terms of suggestions... a lot of that depends on how/where you play this deck... if you wanna go more competitive but maintain the theme my number 1 suggestion would be to trim the fat from the average mana cost of the deck by running a few lower CMC samurai like Devoted Retainer or Battle-Mad Ronin.... id also ditch running Mirror Gallery and simply get a wider variety of creatures... like instead of running TWO legendaries with the same name just run one of each and add in some of the one your missing like Opal-Eye, Konda's Yojimbo.

Okay, three one drops I favor in my build are Icatian Javelineers, Thraben Inspector, and Soldier of the Pantheon. Icatian Javelineers hits a surprising number of things in the format, and really shine against other aggro deck that are faster than White Weenie, such as Infect and Affinity/Robots. I'd look into a 2 of instead of 2 Devoted Retainer. Thraben Inspector gets you a decent body and replaces itself later in the game, I'd consider running 2 instead of Devoted Retainer. Soldier of the Pantheon is straight up better than Elite Vanguard and just 32 cents. Getting some lifegain is the least of it: the protection from cards like Kolaghan's Command and Electrolyze are where it really shines. Now onto the 2 drops. I really like Consul's Lieutenant, because either your opponent has to deal with it or it starts running away with the game. Because it has first strike, it is really nice for pushing through damage. I'd probably run 4 instead of your 4 Unruly Mobs. I'd also consider losing some of your top end cards (maybe 2 Frontline Medic and 1 Silverblade Paladin) for 3 Brave the Elements. This card is absolutely nuts, providing you with a way to protect your guys from removal while also being able to block for free, force chump blocks, or just outright swing in for lethal saying that creatures of the named color can't block.

The single biggest thing I see that's going to shoot you in the face is that you have no 1-drops. Devoted Retainer fits the bill. Next, I know Kamigawa is the Legendary Block, but Honor-Worn Shaku isn't doing you any good when your Legendaries are tied up in your creatures. And when 12/19 of your creatures are Legendary, and you're depending on Mirror Gallery to bypass that problem, it's a poor design decision all around.

Fate Forgotten is a poor choice when you can roll with Samurai of the Pale Curtain and a cheaper card like Disenchant does the same thing - plus the Samurai is a Samurai.

Sensei Golden-Tail is a vital choice, especially as it makes more Samurai, the the Bushido stacks.

Kentaro, the Smiling Cat is only useful when you're splashing non-white Samurai, and in this deck, can be replaced by something like Samurai of the Pale Curtain at the same cost, but a better creature.

As for Lands, consider Eiganjo Castle from that block, even though, yes, I am strongly suggesting that you tone down the Legendary creatures.

Alright, let me lay it out. Samurai are White Weeny Aggro focused, despite the Bushido mechanic being more defensive in nature. You've tagged this deck as 'midrange', but I don't see it. And I've built this deck before.

NarejED For a moment, I thought you were talking about Devoted Retainer. Kamigawa still haunts me.

Also, I agree with the reprints-for-availability-over-drafting thing. From what I know, that's pretty much the reason why Serum Visions wasn't in MM2- scrying wasn't a mechanic in MM2.

Samurai Glory is my personal take on Samurai. No Devoted Retainer, Kitsune Blademaster or Samurai of the Pale Curtain? Call to Glory is worth main.