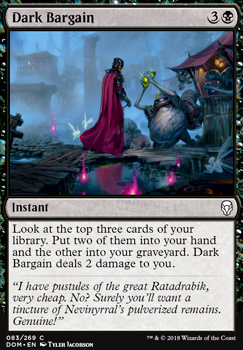 Look at the top three card of your library. Put two of them into your hand and the other into your graveyard. Dark Bargain deals 2 damage to you.

Dark Bargain occurrence in decks from the last year 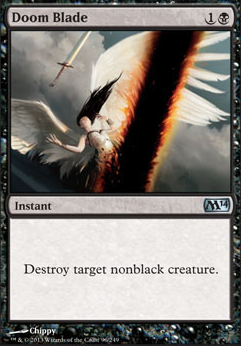 Great idea -- Switched out Dark Bargain , been looking at that as a weak link for a while now.

Instead of Dark Bargain, what about Risk Factor or Sword-Point Diplomacy? If Axis of Morality is on the board would your opponent be more likely to take the damage from those cards or let your draw them?

The feeling is mutual, my friend.

I hear you on Deathâs Presence. Wizards has a habit of making 6 mana enchantments that do nothing by themselves, but still look so tempting to play. I should know better, but I canât help myself.

Maybe Nyx Weaver, Commune with the Gods, Satyr Wayfinder, Mulch, and Dark Bargain are cards that can get things churning early for you.