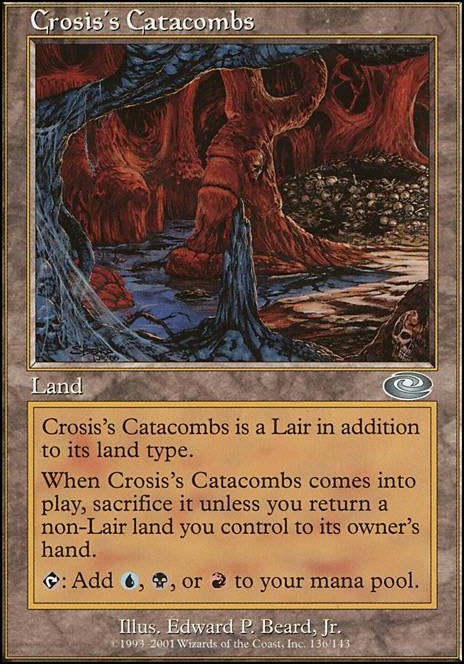 When Crosis's Catacombs enters the battlefield, sacrifice it unless you return a non-Lair land you control to its owner's hand.

Crosis's Catacombs occurrence in decks from the last year

Kess, destroyer of Decks
by Annnd-I-Lost-Again 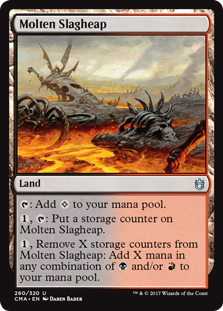 Marchesa the black rose
by LordWaterbird

What about the Lair tri-colored lands from Planeshift: Crosis's Catacombs , Darigaaz's Caldera , Treva's Ruins , Rith's Grove , and Dromar's Cavern ? I know they don't have a basic land type, but they come into play untapped. I love playing them.

Picked up a Painter's Servant - just in case :)

I don't know if you are working off a budget or not, but when cascading, it could be helpful to know what cards are coming, so I'd offer options like Sylvan Library, Mirri's Guile, Sensei's Divining Top, and the under-utilized Soothsaying, and also Scroll Rack if there's something in your hand you want to cascade into play.

When I see decks with 3+ colors, I like to recommend City of Brass and the Lair lands from Planeshift; in your case, Darigaaz's Caldera and Crosis's Catacombs.

I just noticed that I only have 32 lands total. I immediately want to run 35, so Iâll need to add Crosis's Catacombs, Temple of Epiphany, and City of Brass. Theyâre budget choices, but respectable. Iâd remove Whispersilk Cloak, Cruel Ultimatum, and Mystical Teachings. Iâd love to hear if Iâm downright idiotic.

C on If my Commander's Color Identity ...

You cannot. Colour identity is based on all the mana symbols that appear on a card (barring symbols in reminder text), and applies to lands. As such, Dromar's Cavern contains and Crosis's Catacombs contains , and neither can be used in a Dimir commander deck.

I don't think you need these lands. In two colours, you can generally get by mostly using basics--you want to minimize the number of lands you're playing that enter tapped. Between some butdget fetch lands lands (Evolving Wilds, Terramorphic Expanse), and ultra-budget dual lands (Dismal Backwater, Jwar Isle Refuge), etc., you can usually build a pretty solid mana base.

I'd recomend spending a little more and investing in cards that can be immediately playable, such as Darkwater Catacombs, Drowned Catacomb, River of Tears, Sunken Hollow, Tainted Isle, and Underground River.

eatmygender on If my Commander's Color Identity ...

Title fairly self-explanatory, but I was wondering because I'm brewing a budget deck I'm trying to use viable land in, and I'm not sure if I can legally run Dromar's Cavern or Crosis's Catacombs.

This is exactly the style of deck I like. I also enjoy pushing the themes to their full extent, looking for unusual wincons and infinite combos are banned in my group.

I believe you have too many lands. I use the formula 40-(Rocks+Fetch+Other Mana sources), which in this case would be around 35. I suggest you lose the Vivids and the Bounce Lands, and add Crypt of the Eternals, Geier Reach Sanitarium and Crosis's Catacombs. If you own them or have budget, you could easily replace the lesser fetch lands (Evolving Wilds, Grixis Panorama, Terramorphic Expanse) with Blood Crypt, Steam Vents and Watery Grave.

This deck needs Sire Of Insanity. And Rackling. And Bloodchief Ascension.

I would add more wheels: Reforge the Soul and Wheel and Deal.

I am not usually very fond of tutors, but you really need Megrim or Liliana's Caress (or Bloodchief Ascension) to kickstart, so in this case I would run 2 or 3.

Many of your discard spells, like Cruel Ultimatum are single occurrence, whereas Liliana of the Veil can activate each turn.

Scourge of the Throne is a nice dragon.

If you have one or your group allows proxy, add Chains of Mephistopheles will turn these wheels into double the discard and prevent your opponents from building hands. Note that it affects you as well.

Oath of Scholars may very well backfire; if you are the only one holding cards, you are basically letting your opponent draw 3 each turn. I am not sure what the rationale is for including it.

I hope this inspires you!