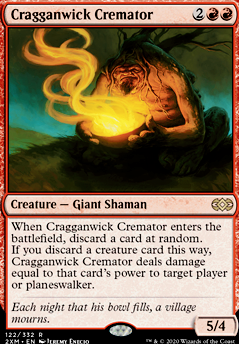 Feldon of the Third Path
by Dreamydayz 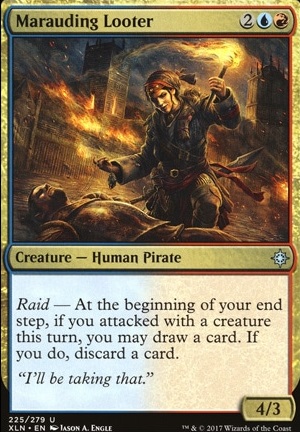 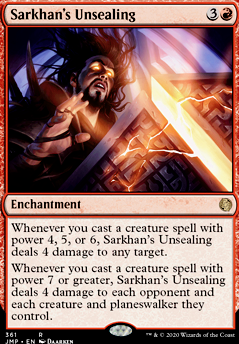 6 Average CMC In Modern??
by NomadicSixGod

Rakdos, the Oddsmaker
by Hazdhurtheabbott

abbatromebone, I think you missed the point a little. This is one of those decks that competes more on the sum of it's parts than high card quality and a deck very similar to this won the magic online challenge last October. Cragganwick Cremator and Impervious Greatwurm make more sense when you consider that together they can deal 16 damage to your opponents face.

Ok, so here's what I see NomadicSixGod...Though I'm open to being wrong here :).

Combustible Gearhulk & Cragganwick Cremator are very likely to be the key win conditions and first creature drops you make (beside Sakura-Tribe Elder ). So, a) I'd say the bigger the creatures for them to use for dealing that direct damage, the better and, b) Having a cheap stomper with trample to follow them up with and finish the job is probably the next priority, whether it's through casting it, or flashing it in with haste with Through the Breach for the final charge.

The benefits of the Titan that I see is flashing him in with Breach for manaramp, correct? And triggering Valakut, the Molten Pinnacle for 6? However, it seems like the same turn you'd be flashing him in, you could be flashing in Combustible Gearhulk to Ghalta/Emrakul/Worlspine someone for 12/15/15 damage, or playing another Cragganwick to deal direct damage that way.

I guess that's the trick of two win-cons, to make one stronger the other becomes weaker, and with this switch we take away from the 3 damage triggers. But it does replace it with a 12 direct damage instead, and then a monster trampler to cheat in for final damage... It just seems to me that Ghalta might make the deck able to defeat the opponent a turn faster as more damage can be dealt, where you might not need those lands.

Of course this is all from theory rather than experience facing other decks with this, but the swap I might make would be: - 3 Primeval Titans + 2 Ghalta, Primal Hungers + 1 Cragganwick Cremator

JKRice the original build of this deck actually did have Scapeshift. I subbed it out for Primeval Titan because titan has better synergies with Combustible Gearhulk and Cragganwick Cremator. I may look to free up a few SB slots for two copies though because you're right it is a great option.

Additionally, I just remembered there was such a deck that cared about big creatures and their power - Cragganwick Cremator. An emrakul discarded to it is 15 damage, an Impervious Greatwurm is 16 damage. You can finish them off with a Lightning Bolt to the face.

Additionally, there are several other cards that care about the mana cost of something to deal damage - Erratic Explosion, Riddle of Lightning, Explosive Revelation that care for the CMC of the cards. Especially when you can stack something on top of your library like Thunderous Wrath. Seems like a cool way to care about big creatures.