Creatures your opponents control get -1/-1 until end of turn. 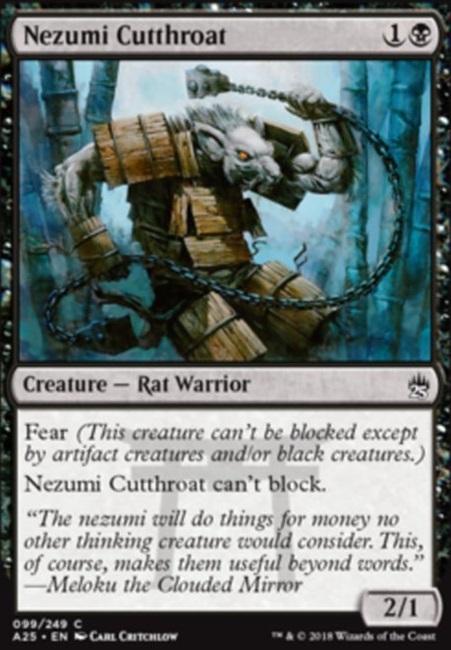 marcello627, thank you for the suggestions! I have found Victim of the night to occasionally not be able to target creatures, so I prefer Grasp of Darkness as it kills a significantly high proportion of threats with significant efficiency, and Echoing Decay is used far more that I had expected to kill two or more targets. Way more than I expected, to be honest. I think both have performed well.

Cower in Fear is absolutely worth the sideboard card spot. That card is GREAT against so many decks.

Another Gray Merchant of Asphodel is fine, but I'll stick with 3. It definitely swings games wildly. I don't know, 3x just seems like a good fit for now.

I like Barren Moor quite a bit, but I think 2x is enough (currently have 1x and have been toying with 2x). There is an element of speed needed for this deck, and tapped lands aren't helpful. Barren Moor is definitely a useful card, so I'll definitely be tinkering with that one.

Sign in Blood is really good; I just haven't needed it and prefer to stick with the removal instead. Personal preference based on play with this so far. That's another card that may make it eventually. At this point, I haven't needed the extra cards. I prefer to keep the creatures and removal higher for now. Still, 2 cards for the casting of a single card is pretty efficient, so it's definitely a card on my radar.

I tried Unearth and found the removal was better to have.

Dead Weight is extremely underrated! That card is amazing for slowing down Gurmag Angler , killing faeries, killing delvers, slowing down other threats, AND it is a permanent (if it didn't kill the target) that helps with devotion. I like Chainer's Edict a lot, but in this case (because of devotion) dead weight synergizes a bit better.

This is silly in the best way possible, that being said I think these changes would help. -2x Grasp of Darkness and -2x Echoing Decay for +4x Victim of Night , put the decays in the sideboard replacing the Cower in Fear . Decay is good in certain matches and a single target removal in others, making Victim better in most situations. I'd also put in +3x Barren Moor s and -3x Swamp s. I'd try and work in another Gray Merchant too since it's just too good not to have 4 of them. 4x Sign in Blood could also help with card draw and using the big life total to your advantage. Unearth ing the rats sounds like just the right amount of wackiness this deck needs, not sure what to cut though. I'd also remove the 2 Dead Weight s for 2 more edicts. Really cool deck idea, I'll have to try this out sometime.

I think you have enough black sources to support Cower in Fear or Crypt Rats . They help a lot against elves, while Chainer's Edict , Diabolic Edict , or Geth's Verdict will give you some interaction with bogles.

hkhssweiss I will add Nicol Bolas, God-Pharaoh eventually, I believe he is very powerful and deserves a spot in the deck. I will not be adding Nicol Bolas, the Deceiver as I feel he is not powerful enough for 8 mana.

I do like all of your ramp suggestions and will use them if I feel the deck needs more mana-fixing/ramp.

Sweltering Suns and Cower in Fear are too weak to be good in this deck. Sadistic Sacrament is so cruel and so awesome! That card can single handedly take out an opponents chances of winning so I will definitely throw that card in at some point. Countersquall is an auto-include as itâs an on flavour Negate. I removed Slave of Bolas because I felt it was too much mana for the results it produced. Crux of Fate is definitely strong and I will consider it. The only problem with the card is if I come up against a deck with a large amount of dragons. Blood Reckoning will almost never stop the token decks from killing me so I decide not to run it. Imp's Mischief while on flavour, can easily be replaced with a copy of Redirect so that I donât lose life. Great suggestions!

I feel like you will need to add in all the Nicol Bolas planeswalkers in here. I am very particular to Nicol Bolas, God-Pharoah and should be included in here asap LOL!

Also Nicol Bolas, the Deceiver would be on point with theme as well, since we are in Grixis colors. We need all the mana acceleration ramp, cards like Dimir Signet, Rakdos Signet, Izzet Signet, Talisman of Dominance, and Talisman of Indulgence will help you in casting all the spells since Bolas loves doing things in style.

Some fun cards that go with the flavor are Sadistic Sacrament, Countersquall, Crux of Fate, Imp's Mischief, Slave of Bolas, Cower in Fear, Blood Reckoning, and Sweltering Suns.

Thanks for the suggestions, I will cut : Costly Plunder, Cower in Fear,Disenchant, Duress, Lapse of Certainty, Hymn to Tourach, Unearth, Armillary Sphere, Darksteel Ingot, Pilgrim's Eye, Alloy Myr and some lands.

I will look for more alternatives to add some other cards. :)

There's a printing of Countersquall from the Ajani vs Bolas duel decks that has Bolas in the art and flavor text. Cruel Ultimatum is an absolutely massive spell, and you can get one with artwork with Nicol Bolas in it. Hour of Devastation is a board clear and extremely Bolas-flavored. Dragons of Tarkir's printing of Tormenting Voice has Bolas in it. Wit's End from M13 also has Bolas.

Gem of Becoming, God-Pharaoh's Gift, Throne of the God-Pharaoh are all related to Bolas in flavor.