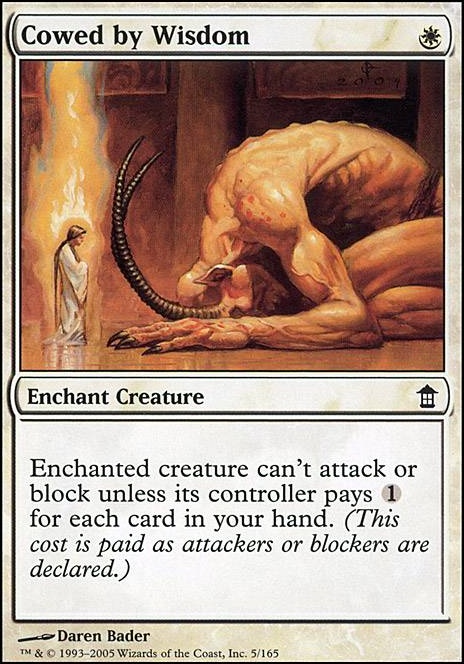 Enchanted creature can't attack or block unless its controller pays (1) for each card in your hand.

And I thought I didn't like voltron... ($50)
by silberwasseraron 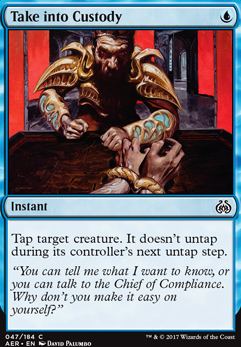 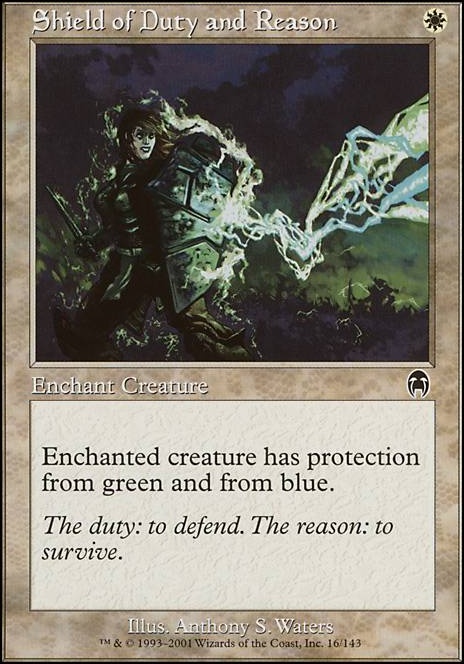 Haters Gonna Sit Down
by EIV

I'd include a playset of Kitesail Apprentice as a strong 1-drop. They synergize with your equipment theme and are good beaters.

Lone Missionary is a solid 2-drop you won't mind returning with a Skyfisher.

For these, I'd cut the Sky Climbers and Cartographers. The climbers are too mana hungry (rather be equipping stuff) and the cartographers are too expensive for their body.

I also recommend a playset of Bonesplitter, arguably the best equipment in Pauper. Cheap to play and cheap to equip, a perfect T2 investment after a Kitesail Apprentice.

Cowed by Wisdom seems kind of weak, you're better off using Mana Tithe if you to cheese people with white's counterspell, or Journey to Nowhere if you want solid removal.

are all super helpful in my EDH decks for avoiding death. Then you just need something like Sterling Grove to help further protect your enchantments.

Also, have you considered cards like Aura of Silence, Cowed by Wisdom, and Suppression Field to slow down your opponents? Might make then hate/target you though :/

It's Ok you can have it.

I have an idea here (VERY Rough Draft) and I'm not sure if it'll work but I'm Sure you can see it,

Basically lock down your opponent and give him/her cards that kill them.

Use Norn's Annex to slow them down on attacks and (Hopefully) force them to pay life to attack.

Strip Mine and Sinkhole to slow them down

Best combo being Demonic Pact Run out the first 3 options that benefit then kindly Donate That card to your opponent so they can use it too. XD

Illusions of Grandeur Is great too just play it pay its upkeep once (if you dont have the mana yet) and pass it off and they're forced to pay it or lose 20 life.

Hey legendofa. Black white control is an awesome combination, it has that essence of Orzhov without even trying. So, here are my ideas of where the deck could go.

Firstly I think the deck needs a little focus. What do you want from the deck, what do you want it to do. Cards such as Nip Gwyllion, ask what does it add to the deck. You have a discard theme running through it, so let us stick with that. However, keep in mind that you must also stay alive.

So I'd run a full four Tidehollow Sculler, make sure I get to play it turn two. If I hit the hand, I like to hit it hard. So from the Sculler go into Sin Collector at three, then at four go to Disciple of Phenax, then at five Vizkopa Confessor. This way you have plenty of blockers, and life gain with the confessor, but you're still hitting their hand. This sort of deck does work well with Shrieking Affliction (basically a cheaper version of The Rack), but don't feel that is the route you have to go down.

For removal, you need to be quicker off the mark. If you want to go the enchantment route that's fine, but I would run some one mana enchantments in there to slow them down straight away so aggro decks don't run through you. Oppressive Rays is a favourite of mine, in the mid-late game it is less effective, but with the hand destruction, your opponent doesn't have much of a mid-late game. The rays slow your opponent down from the first turn. You can also run Guard Duty, as your creatures aren't really running in. The other one you can run is Cowed by Wisdom, but it doesn't have the same power if not running much draw power. For two mana I'd go the the classic Pacifism, there is no messing about, it gets rid of the creature. Darksteel Mutation still allows them to attack if they boost it etc, but does get rid of the abilities, so whichever is more fitting for the players you're against. You then have Pillory of the Sleepless for three mana, and if you wanted you could run One Thousand Lashes, same as the pillory but stops abilities as well. Running these cards is a win condition in itself, especially if run alongside the confessor. Not the fastest, but it's cruel. I used to run a deck where its win condition was just Blind Obedience extort triggers, and it did feel good! A little expensive for this deck, but you get it from the confessor, and he discards.

Anyway, so how about some draw power? Really I think you have to main options, if you want it instant speed then Succumb to Temptation, but if you're running a load of creatures and enchantments, instant speed for draw isn't very important, so I'd go with Read the Bones.

So there are a few ideas for you if you want to go down the enchantment and discard route. Of course, if you run even more enchantments you can always go down the Sphere of Safety route which is a deck I absolutely love! If you decide to go down a different route from discard and enchantment though, just let me know and I'll throw some more ideas your way.