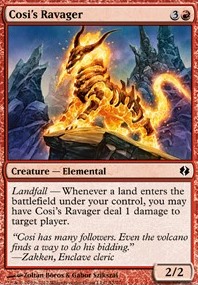 Landfall â Whenever a land enters the battlefield under your control, you may have Cosi's Ravager deal 1 damage to target player. Born Wild on Valakut
by raefgall 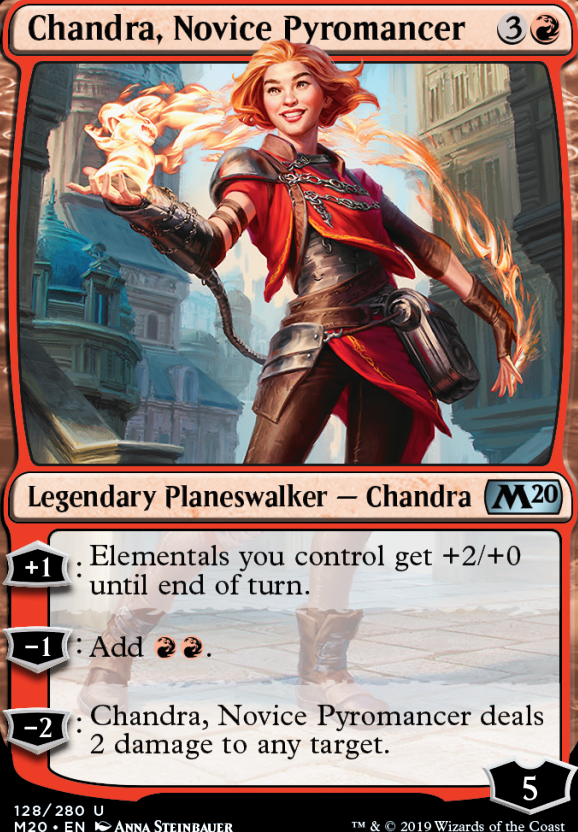 Lord of the Land
by crazybryman91

Hey AdmiralFisticuffs! I really like the idea of what you're trying here, since so many of the lands matter creatures are Elementals, and Horde of Notions is just so cool with its ability. I was slightly disappointed not to see Primal Beyond in the deck given the title. Cavern of Souls could be helpful if you're expecting counterspells. You should probably cut Tabernacle for a more casual meta. You need more extra land play cards if you are playing so many lands, like Wayward Swordtooth, Mina and Denn, Wildborn, and Storm Cauldron.

Hedron Crab and Mesmeric Orb could help you fill your graveyard, and also mill opponents out for a win. Retreat to Hagra and Ob Nixilis, the Fallen can burn your opponents. Cosi's Ravager does the same but is an Elemental. Liege of the Tangle, Embodiment of Fury, and Embodiment of Insight can animate your lands to attack, and since they become Elementals Coat of Arms, Door of Destinies, and Shared Animosity make them really big.

I think you need 4 Retreat to Coralhelm, since that's the real piece of the combo that doesn't have a duplicate. Tideforce Elemental, I think is the closest one, but then you would need a ton of blue mana, and the elemental would have to stay on the battlefield for a turn.

Maybe Skyshroud Ranger could add some redundancy to your combo, since it does the same thing as the snake scout.

Also, I didn't realize they printed Tunneling Geopede, which completely replaces Cosi's Ravager, so is an automatic 4-of.

Turn 2: Land, tap scout to get a third land Retreat to Coralhelm

Turn 3: Play Tunneling Geopede, tap scout to put Gruul Turf into play, and have it bounce itself. Retreat to Coralhelm untaps the scout, who repeats this process until Geopede kills the opponent.

I love this deck idea. I think you don't need those planeswalkers, or any of your instants or your elf ally, but I'm not sure what other cards would support your strategy.

I think use Sakura-Tribe Scout instead of Walking Atlas.

Also, I think all of your infinite combo pieces should be 4-of. Perhaps Cosi's Ravager, so you don't run into the problem with summoning sickness, and allowing you to kill your opponent instantly.

Since you commented on my deck:

Ultimately though, your deck seems to have no real gameplan. It mostly seems like you've just thrown together the cards that you own. The one I'm proposing is based around getting the most out of your commander's abilities. Really though, even if you choose to go another way, you want to make sure your cards are synergistic. I'd advise against cards you essentially need to pay for twice, such as Megamorph or paying mana for Landfall effects, unless those effects are going to greatly get you something you need.

Tunneling Geopede would be an easy upgrade to Cosi's Ravager. Landfall looks really fun, I'm going to give it a try with Mina and Denn, Wildborn.

Looks fun, but try removing Cosi's Ravager, as you are not playing any fetches. Also, try adding in Thada Adel, Acquisitor. If you want to shave down a bit, try looking at the cards you only have one of and determine whether or not they are absolutely necessary. You might also consider removing a color. Cool idea though.