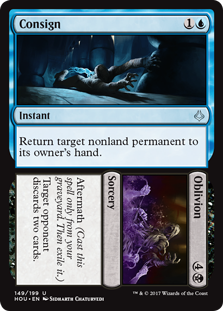 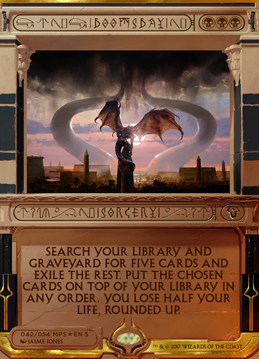 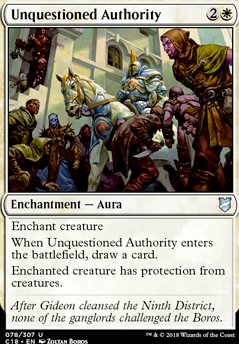 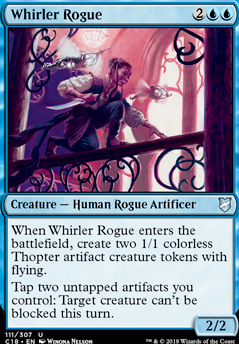 Hey, I was looking over this list, would Laboratory Maniac/Demonic Consultation/Tainted Pact combo fit? it is 3 two card combos in 3 cards, and it is great with the amount of card advantage this deck can acquire!

If you are concerned because of the landbase not supporting Tainted Pact, drop down to one basic of each type and then add:

These will replace the 11 you dropped, and for what else I would consider dropping, Vapor Snag could be easily dropped for Chain of Vapor, or Unsubstantiate, either way I think it would be an upgrade.

Consign probably could be dropped for a Delay, or any Unsubstantiate, Spell Pierce, Chain of Vapor, or like anything else, I understand it has discard too, but I don't think that is worth it.

I love how you've refined the deck. It plays a lot more streamlined and consistent, so excellent job ncjhou.

1) I definitely agree with your choice of cantrips. Opt really helps smooth out your draw, and the scry is a definite bonus. Before Ixalan I used Censor (for cycling) but Opt is even better.
2) Alright, I'll be curious to see this deck transition from standard to modern.
3) I think I would switch out 4 Ammit Eternal to transition in 2 Death Barons and 2 Lord of the Accursed.
4) From my experience, Trespasser's Curse is actually worse than it seems. Against token spam decks, if you can get it out early enough, it does massive damage. But if you're drawing it in the later game, it's kind of useless. In the sideboard, I personally try to avoid cards that are only good at a specific point (that's why I hate Leyline of the Void and Leyline of Sanctity). But, at the end it's your decision whether to keep it or not.
5) I would probably agree, but I use Blink of an Eye rather than Consign most of the time.
6) I'll look into replacements for Vraska's Contempt, but my other two suggestions don't work in the colors. I normally use Dreadbore and Terminate, but those aren't in the colors so let me look into something else...but to be truthful, just bouncing a creature/planeswalker to their hand and countering it when it enters the battlefield normally work for me.
About the sideboard: Leyline of the Void and Leyline of Sanctity are good against certain types of decks. Fulminator Mage is very useful in the sideboard.
Otherwise, I have no other suggestions. Keep building and tweaking!
This deck could become very standard/modern competitive, so nice edits, ncjhou. -magicsheep

magicsheep, Here is what I came up with after getting rid of the red. I feel this deck is alot more focused than it was before. I agree with you regarding a cantrip to get me to The Scarab God or an answer to something on the board. I'm going to start with Opt and see how it goes. With Opt being instant speed that would allow me to leave mana open for a counter or other removal and then cast it on opponent's end step. Plus, in a pinch, Torrential Gearhulk could cast it out of my graveyard.

I'm going to keep it standard legal until the Kaladesh stuff rotates out in a few months. Then, I'll add in 4x Underground River to fix my mana and possibly some dimir fetches/shocks if the deck is performing well and I'm having fun playing it.

As for creatures, I think Eternal of Harsh Truths may be a keeper into modern since it will deal damage whether blocked or not with the huge upside of drawing a card. I'm not so sure about Ammit Eternal, though. I think those spots will be better served Lord of the Accursed or Death Baron.

Trespasser's Curse seems like more of a sideboard card, but almost every single standard deck plays creatures and this seems like good value for a two-drop. Once Kaladesh rotates out I'll probably relegate those to the sideboard in favor of Relentless Dead.

I haven't played alot of modern (mostly edh), but I think Fatal Push would slot in well in a modern deck as cheap creature removal. I envision Consign working well as a two-drop bounce, but being able to cast the aftermath discard spell from the graveyard would be handy as well. Plus, Torrential Gearhulk would be able to cast either part of it from the graveyard.

Vraska's Contempt is where I'm a little torn. It plays fine in standard. I like that it exiles, plus it can deal with planeswalkers and incendental life gain is not a bad thing, but I feel like 4 CMC is a little pricey for for what it gives you.

Sideboard cards will likely include: Duress or Inquisition of Kozilek, Spell Pierce, and Trespasser's Curse. Hostage Taker and/or Clever Impersonator also intrigue me as a potentially interesting sideboard includes. Is there anything else worth considering for the sideboard?

I absolutely love this deck; seems borderline competitive, since it beats almost anything in the late game with the brutal, repeated mind-control from Kefnet's Last Word.

But, you might get swamped early on by little creatures. Maybe replace two-three of Kumena's Awakening (since you don't ascend very easily with this deck) with some Essence Scatter / Consign / Censor type cards

Approach Until Banned or September...

I like the Abrade thing. seems mardu vehicles and gearhulk decks are popping everywhere...specially in my LGS.

I also thought about putting Sweltering Suns in the main but as of now, early removal cards are doing well in this deck. if theres a lot of tokens, sure, ill sideboard it. I also considered Bontu's Last Reckoning for uncounterable threats such as Nezahal, Primal Tide, Carnage Tyrant and those creatures that go big.

The Consign will be replaced by Cut because I can use ribbons as my alternate finisher if the game goes longer and I have plenty of mana. With Disallows, it has some conflicts with etali if it does the trigger like what I said on the guide above. I can put it in one of the sideboards post game against control mirrors.

I am considering 1x Primal Amulet  Flip in the main. DO you guys think its worth it?

You can't play that card. Nope not that one either

While adding a third color isn't ideal, splashing blue could give access to cards like Consign and Expel from Orazca to buy time and reset your enchantments to rename different threat cards from an opponent. Additionally, blue gives access to counter spells and some good card draw which of course are good in a controlling type deck.

try Perilous Voyage over Consign, since it's a possible scry.