Chorus of the Conclave

As an additional cost to play creature spells, you may pay any amount of mana. If you do, that creature enters the battlefield with that many additional +1/+1 counters on it.

Chorus of the Conclave occurrence in decks from the last year The Elephant In The Room
by SenseiKreese 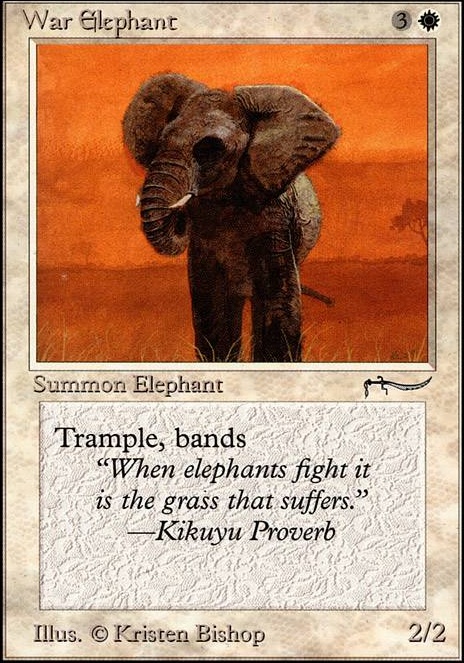 The Elephant In The Room
by SenseiKreese

Angels, Men and Counters
by Kreshnic

Chorus of the Conclave Discussion

SynergyBuild on What Card Should I Put â¦

As I am told to do by my overlords, Captain Sisay is the commander you want for all of your EDH decks. It can find Gaddock Teeg, Trostani Discordant, Karametra, God of Harvests, Chorus of the Conclave, Paradox Engine (for an instant win with Mox Amber, Mox Opal, Seton, Krosan Protector, and then line up any win of three drops like Bow of Nylea, Bontu's Monument, and Mikaeus, the Lunarch) and Dragonlord Dromoka, as well as many other good utility cards like Avacyn, Angel of Hope, other tutors like Yisan, the Wanderer Bard, Inventors' Fair, etc. and removal like Urza's Ruinous Blast, Mangara of Corondor, and many other great inclusions.

For example, it can fetch any walker, many legendary lands, protection for itself like Hammer of Nazahn, fun wincons like Helm of the Host, etc.

DemonDragonJ on What Card Should I Put â¦

I have three EDH decks that contain the colors white and green (to be specific, one is red/white/green, another is blue/white/green, and the last is black/white/green), and all of them contain Chorus of the Conclave, which, when I built those decks, seemed to be a great card, but I now realize that it simply is far too expensive to ever be practical, because I shall already have summoned many creatures by the time that I can afford to cast it and each deck has plenty of other ways to make creatures more powerful.

Therefore, I shall be replacing my copies of that card with another card, and I would like to have it be another green/white creature, but less expensive, obviously. Some of the other creatures that I am considering are Dragonlord Dromoka (because her final ability is very powerful), Karametra, God of Harvests (because my green/white decks hav plenty of creatures and mana acceleration is always welcome in any deck), and Trostani Discordant (because she gives bonuses to all other creatures and also foils strategies that take control of other players' creatures; i.e., she would be great against my friend's Memnarch EDH deck).

What does everyone else say about this? What card (either any of these three or another one entirely) should I put in place of Chorus of the Conclave? I eagerly await your feedback.

Modified the wincons, taking out Artisan of Kozilek and adding more flavorful ones, matching the ramp theme: Vengeful Archon & Chorus of the Conclave.

Chorus of the Conclave is an awesome card I hadn't seen before. I'd sub out Cancel for Counterspell and maybe throw in Cyclonic Rift. A little more ramp would be good, too - try Cultivate and Explosive Vegetation.

Try Chorus of the Conclave. It makes Marath cost more when you pay for the counters, so it is like paying x mana for two times x counters.

enpc I never at any time said Gwafa is a tier 1 or 2 build but putting him the same category with useless commanders like Huang Zhong, Shu General or Sidar Jabari or overcosted ones like Chorus of the Conclave or Lu Bu, Master-at-Arms is also not a good assessment. If you took the time to look up I said specifically that Gwafa should be Tier 4 maybe tier 3. I admit that he is conditional but he is good at what he does. There are a lot of reasons for this.

1) Maybe the best combination of control colors in magic. By being pillowfort, you buy time until you find your answer and grind into a game win. I cannot tell you how many times against competitive decks that I have done 10+ commander damage with Gwafa as we as slow down creature based strategies.

2) He is instant removal. Yes the opponent nets a card but it can shut down a win-con which is more important. Voltron strategies groan heavily when I flip Gwafa because they know they will have to work extra hard to get in.

3) Backed by removal and counters. YEs they net that extra card but after you bribe them, any good blue deck has a counter suite to handle what comes next. By buying time, you let a good control deck stabilize. If Gwafa didn't net a card, every U/W conrtol deck would be using him as a commander

Hey, sorry I didn't answer your request about dryads yet, I just couldn't find the time. If I were to build dryad tribal, I'd try something GW. There aren't that many enchantment synergies among the dryads, but I think I'd go with somtething like this:

Lands: 24 (however this part will look)

2x Chorus of the Conclave

2x Cream of the Crop

This is a pretty rough draft though...there definitely is missing removal, and some more token production for trostani's populate ability seems necessary. But as a starting point, it seems fitting. What do you think?