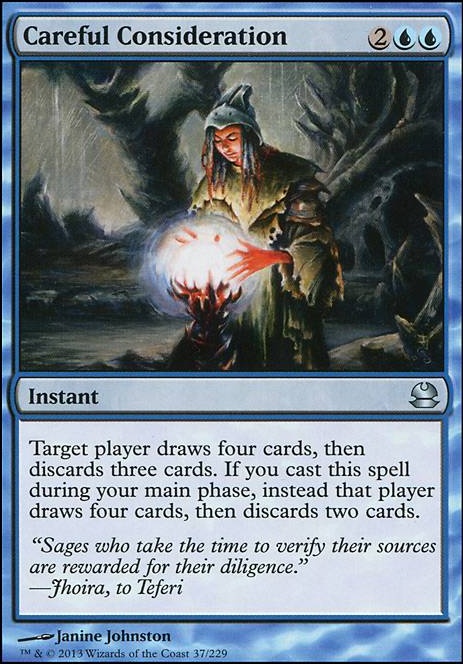 Careful Consideration occurrence in decks from the last year OnE sHoT mAn
by Bananaman27

I seem to have been Revoke Privileges to use images in my decks, after doing it wrong. I have now read up on the matter and Cleansed up all my links so they point to my imgur account.

Would you consider the Generous Gift of allowing me to Return to the Ranks of regular posters?

Tahnk you for your Careful Consideration.

Sure thing Rasaru. Your list is actually very good.. the only things I would definitely take out are Sphere of the Suns and Careful Consideration . I think Chakram Retriever and Slagwurm Armor would be good swaps for those.

It is challenging to win with mill. But it is also way more rewarding to win with an underdog strategy than with something everybody knows is strong. I say if you like mill, then go for it. Your build definitely looks like it'll nab its fair share of Ws anyway.

I like about Careful Consideration that it can target myself. I run some cards, that are not very good in particular matchups. For example Damnation ist not good versus control. I like to have ways to get rid of those cards. Being instant is another huge plus for the Careful Consideration over many other similar cards. That said, Wheel and Deal is a cool idea, i try to find room for the card :)

@ God-Eternal Kefnet : I totally agree, but atm i do not run both 6/6 demons and in my opinion being 6/6 is better then being 4/5. Its for me similar to running Gurmag Angler over Tasigur, the Golden Fang . The added bonus is nice to have, but often not relevant.

Golgari Charm is a great out versus many problematic cards. -1/-1 gets rid of an opposing True-Name Nemesis , Sai, Master Thopterist token, Loyal Apprentice and its token, many other red aggro cards, Bitterblossom tokens (or Bitterblossom itself), buying a turn versus Yuriko, the Tiger's Shadow , killing a lot of cats in Arahbo, Roar of the World , killing mana dorks, etc...

There are also a lot of enchantments that are very problematic for this deck. For Example: Blood Moon , Hall of Gemstone , Song of the Dryads , Opposition , Treachery , Stasis , Search for Azcanta  Flip (getting out of the lock), Parallax Wave , etc...

I think i have never used the third mode :)

Nissa, Vital Force is a good answer to a planeswalker, blocks like a champ, closes games and is incredible fast on her ultimate. The -3 is sometimes also nice, but not as relevant as the other two modes.

I see you've made huge changes in your build to adapt your lgs meta, back to counterspells and disruption tools ? Bringing disruption I can understand Careful Consideration but doing some research I have found this Wheel and Deal isn't it a better version ? Or maybe both could be included if there's engouh room ?

And about God-Eternal Kefnet I don't see only as a way to cast copies of instant and sorcery but also a good and resiliant beater.

There's two cards I'm not sure to understand in your build Nissa, Vital Force and Golgari Charm , I mean they're good cards but which mods are really relevent here ?

yo TheMillKid thanks for your suggestions!

Rogue's Passage is a nice idea, and not so prone to be removed. Included! Key to the City is ok, i guess- it does a bit of everything. I shall consider it for later use but right now, i cant find a slot for it.The draw ability is a bit expensive and conditional... hmmm

As for Ideas Unbound , Concentrate , Harmonize im not convinced. I dont like the idea of sorcery speed card draw. So, it try to avoid that if possible- better to play it EOT. Tezzeret's Gambit is sorc speed too, but low cost and provides additional value through proliferate.

Breakthrough is nice because of the fact that it provides Draw trigger for really low mana cost. So i consider it after the next few games... very possible inclusion!

Careful Consideration is exactly what i need! Similar to Breakthrough and instant speed! Included!

Cephalid Coliseum well i need a copy of it! Nice! Will Include!

Compulsive Research is a bit tricky. I need early lands and run a bit few... ill keep it in mind!

Song of the Dryads reincluded. U convinced me. In Fact, i consider Imprisoned in the Moon too...

I think KayneMarco has a good point about cards like Rogue's Passage . Key to the City is another good option, since it's cheap, and actually can provide a bit of additional card advantage.

Some extra low-cost draw spells to pump Toothy could be Ideas Unbound , Concentrate , Harmonize , Ancestral Vision , Breakthrough (although this one has a big downside), Careful Consideration , Cephalid Coliseum , Compulsive Research , and Ordeal of Thassa . On a related note, Thassa, God of the Sea would be another good addition, smoothing your draws with scry while also providing another way to make Toothy unblockable.

I honestly believe Song of the Dryads is one of the most powerful removal spells around, because turning a commander into a Forest just invalidates them until the enchantment is destroyed (because their forest general isn't destroyed by cards like Wrath of God ).

For I have become God, Bringer of Life and Death

Hi man, I've seen your post on reddit and, with that budget, I think you need some rocks like Sol Ring, Azorius Signet Fellwar Stone Chromatic Lantern Fieldmist Borderpost instead of 5 lands. Still for the land part Land Tax will give you an easy land drod and Compulsion instead of Gift of Estates and Careful Consideration. I dont know if you avoided it intentionally but with Strionic Resonator you can combo off with Brago, King Eternal. Still a good list and +1 for me!