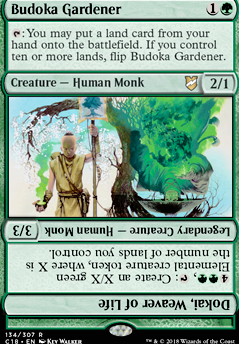 Budoka Gardener / Dokai, Weaver of Life occurrence in decks from the last year

I turn Around and Find... I am Lost in the Woods!
by DriftingEpyon 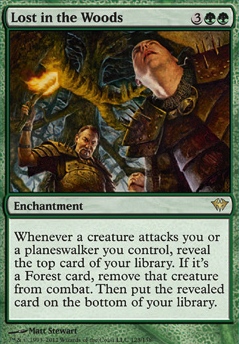 Budoka Garden of horrors
by Zacky-kun

EDH Gardener of Kamigawa
by Deathholme 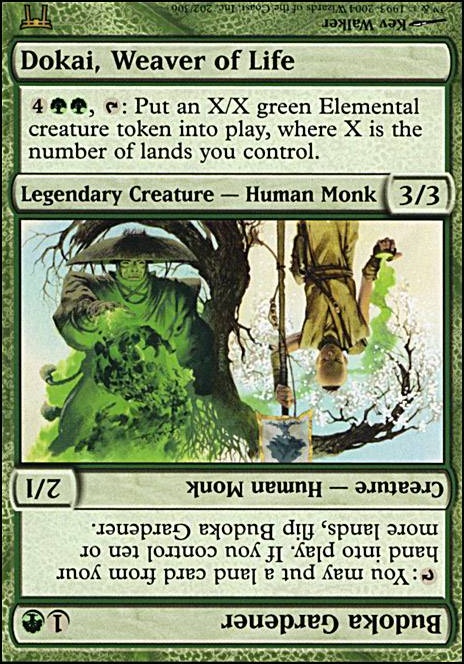 Budoka and His Vengeful Garden
by adogydog 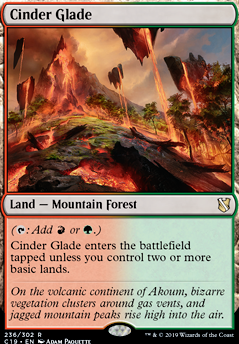 Something I never thought of in my Korvold deck was Budoka Gardener / Dokai, Weaver of Life .

Cards that would make this better? Endrek Sahr, Master Breeder and Phyrexian Reclamation .

Also Prossh, Skyraider of Kher is a another fun one for feeding him giving 6 tokens with the 5/5 flyer.

The first of these suggestions are lands that give you value, repeatable value with Crucible. I see Grounds and Glade in the manabase which makes Lore a good two drop land ramp spell. Signal and Empath are additional tutors for your finishers creatures. Cultivate and/or Reach are not ideal, but they're pretty good with Wildborn because they basic land ramp and put a basic land into your hand which you can play because of Wildborn.

Hey, Jund Panorama and Naya Panorama are budget fetch lands. Game Trail and Sheltered Thicket are budget Gruul duals lands. Fierce Empath can tutor for Avenger or Baloths or any other 6 CMC or higher creature. Signal the Clans is an instant tutor to search for three different creatures and put one of them randomly into your hand.

Mina and Denn, Wildborn gives you another land drop per turn and it's a landfall enabler. Budoka Gardener / Dokai, Weaver of Life and Walking Atlas let you put a land from your hand onto the battlefield. Skyshroud Claim , Farhaven Elf and Wood Elves are upgrades for land ramp. Smokebraider can help to ramp into Omnath, Avenger or other Elementals.

Beast Within , Nature's Claim , Hull Breach and Decimate are upgrades for removal spells. Greater Good is a draw engine and sac outlet for Elementals. Multani, Yavimaya's Avatar is a upgrade for finisher creature and he's an Elemental. Bane of Bala Ged is an underrated budget big creature; it's excellent with haste. Rhythm of the Wild is more haste and protects your creatures from being countered.