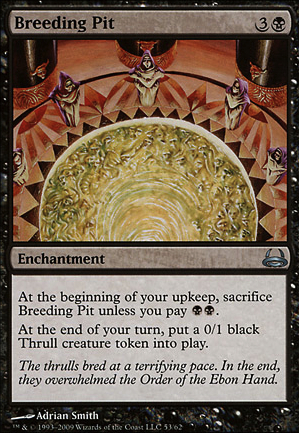 At the beginning of your upkeep, sacrifice Breeding Pit unless you pay (Black)(Black).

At the end of your turn, put a 0/1 black Thrull creature token into play.

The Court of Locthwain
by Teufell

What I suspect is going on is that your opponents are doing a lot on the aggro front. There're a few ways you can deal with this.

First, you can discourage your opponents from attacking you. Propaganda is probably the best-known card for this, but there're plenty of others. No Mercy comes to mind -- it was one of my favorite cards when I was a kid. Crawlspace and Silent Arbiter are good ways to limit the number of attackers an opponent can pressure you with, and assuming no trample, you likely can just chump away whatever they're hitting you with. Finally, Meekstone will keep the most dangerous ones tapped. I think any of these will probably be better than AEtherize , especially since none of them are 'single use.'

I don't know your meta. However, a lot of the time fatties come down without being hard-cast, like through Natural Order or Reanimate . Running hate cards, like Grafdigger's Cage , can prevent this.

You also seem to be light on wrath effects. Yuriko, the Tiger's Shadow ninjutsu ability gets around commander tax, meaning he'll really only ever cost to put down -- so feel totally free to wrath with him on the board. Kindred Dominance strikes me as being way too much mana to do real damage in the earlier stages of the game, especially if you're fighting a bunch of aggro decks. Damnation is, I think, preferable here, as are Toxic Deluge and Cyclonic Rift . Damnation and Toxic Deluge being four and three mana, respectively, means you can conceivably cast them before you're getting smacked but while your opponent has a summoning-sick army. Cyclonic Rift 's overload ability IS seven mana, but being instant speed makes up for that (at least in my opinion).

If you include wrath effects, non-creature token producers are worth including -- they'll give you creatures to 'return' with Yuriko's ability while surviving the wrath themselves. Bitterblossom is the best here, though like most good cards, it's relatively expensive. Other options include Breeding Pit , Graf Harvest (if you wrath Yuriko to the 'yard, you can exile him to the command zone to create a token, then ninjutsu him out on the token when it attacks), Spawning Pit and Volrath's Laboratory (which can make ninjas).

If you decide to run some of the above cards, they should replace your one-for-one removal cards. In general, EDH games will have you facing three opponents, and therefore three times the number of cards you have. You therefore want cards that will effect more than a single card your opponent has. Hero's Downfall and Grasp of Darkness may be great in one-on-one formats, but in EDH they simply don't pack enough punch. (One interesting exception to the 'limit your one-for-ones' rule is the inclusion of counter magic. In general, I think of counterspells in EDH as more than one-for-ones, since A) they can save more than one of your cards if you counter something like By Force or Fire Covenant , and B) they can stop combos cold, making your opponent waste all the combo pieces s/he/they cast before the countered card.)

I have some non-combat related suggestions, too -- I hope I'm not being presumptuous in offering them:

I'm sure you've noticed how awesome your Treasure Cruise is: being eight on a Yuriko flip but often costing around two or three mana at most to cast is pretty busted. There're other delve cards to consider, though I do think it is likely more than one or two in a list will occasionally cause issues when delve gets in its own way. Dig Through Time is a primary candidate here, as it is also eight mana, but it also happens to be an instant (yay!). Temporal Trespass also comes to mind.

In magic, there're a bunch of alternate casting-cost cards that work well with your general, as their CMC is usually pretty high. Unfortunately, some of them are expensive -- I'll just mention them, in case you have more money to blow than I typically do: Force of Will and Commandeer . Spinning Darkness , Gush and Misdirection are all more affordable and alright cards in their own right, though they are significantly less powerful.

Nexus of Fate is a pet card of mine, and I think it'd be genuinely good here. It hits for seven, but doesn't 'really' make you tap out since if it resolves you get another untap step right away.

A creature to consider is Baleful Strix . Having deathtouch and flying make it really hard to block, and if you keep ninjutsu-ing it back to your hand you can keep casting it for the draw trigger.

Top-deck manipulation is a good way to make sure your general hits his hardest, and your Brainstorm is a good start. Mystical Tutor isn't too much money, though the black version, Vampiric Tutor , definitely is a lot of money nowadays. Scheming Symmetry is an alright replacement, though you'll want to be sure to kill the opponent who searches, or at least remove his top card. Though they're pricey, Sensei's Divining Top and Jace, the Mind Sculptor

really are the best ways to mess with your top few cards in the game; Jace has the added bonus, like Brainstorm , of being able to top cards that you want to reveal with Yuriko's trigger again. Dream Cache and Telling Time are both OK top deck manipulation.

Cantrips are good. I suggest running Preordain in addition to your Ponder and Brainstorm . It's not as good as the two you have (in this deck), since it can only leave one card on top of your deck for Yuriko triggers, but I still think it's worth playing. As a turn one play, it's gonna be hard to beat. (Of course, Ponder does still beat it.)

Finally, mass card-draw is a good thing. Even if it doesn't trigger Yuriko, having spells to cast is always preferable to not having them (exception: Mindslaver ). Windfall is excellent, especially if you put in Narset, Parter of Veils (I think you should). Fact or Fiction and Chemister's Insight are both good instant-speed draw spells.

Only good things! Hope this helped.

Do you know of Breeding Pit ? May be useful in a more budget version.

After checking out my Thrull Tribal deck....I'd recommend the following:

0 Put a Loyalty Counter on Bolas, Spark-Stealer for each Planeswalker you control

-4 Search your library for a non-Bolas Planeswalker card and put it onto the battlefield under your control. If it is black, it enters the battlefield with an additional Loyalty Counter on it.

-14 Bolas, Spark-Stealer deals 21 damage to target player. You may draw up to 21 cards.

Nicol Bolas, Spark-Stealer can be your Commander.

Here's my idea. I wonder if his initial loyalty is too high, though, although I wanted to keep the theme of Bolas and his sevens.

Also, since I missed the double-Planewalker challenge I'd been waiting for, I'm just going to make those anyway.

When Vigarae dies, flip her.

"My sister wants to seek new lands, but I believe that Sarrpadia's safety remains enough for the Children of Sarr."

-6 You get an emblem with "Whenever you cast a creature spell, create X 0/1 black Thrull creature tokens, where X is that spell's converted mana cost."

Whenever you cast a Thrull spell, Scorliax gains Double Strike until end of turn.

When Scorliax dies, flip her.

"My sister would sit idly by and wait for another swarm of monstrosities to invade Sarrpade, but I would take whatever else makes up this world for the Children of Sarr to inhabit ."

+1 Sacrifice a Thrull. If you do, destroy target crature.

-1 Thrull creatures you control get +1/+0 and gain First Strike and Vigilance until your next turn.

-6 You get an emblem with "Whenever you cast a creature spell, each creature you control gets +X/+X until end of turn, where X is equal to half the number of creatures you control that share a type with that creature."

Those girls above are what I imagine the leaders of Sarpadia's Thrulls to be like in the current era. Apparently, Thrulls took over the entire continent of Sarpadia. Later, after they'd been established for a while, the Thrulls were attacked when Sarpadia was chosen as the invasion point for the Phyrexians.

That didn't go well. For the Phyrexians, that is. They got beaten so badly Yawgs decided to pack it up and not bother fighting Thrulls anymore.

As for the appearance of the two Legendary Thrulls I designed, think the woman's face on the art of the original Breeding Pit card from Fallen Empires. My design is that the Thrulls want to emulate their creators, but they don't quite get it right. This leads them to have a similar impossibly-beautiful-porcelain look as Achroma, while still maintaining the Thrullish possibility of having tentacles for arms, because having tentacles is useful and Thrulls are nothing if not practical.

Angry Omnath on a Budget

Building and testing my Omnath, Locus of Rage deck I realized that 2 mana for fetching a basic land is good, 4 mana for fetching two lands is great, but 6 mana for fetching three lands is a terrible deal. If you are casting such an expensive sorcery you should get a way bigger effect on its own before adding any synergies. Boundless Realms is a great card but Nissa's Renewal and Verdant Confluence are lacking heavily.
Getting three cards form graveyard from Verdant Confluence instead is okayish, but for that end is way better Seasons Past it usually gets me five to seven cards form the graveyard.
Traverse the Outlands is just a lower cost sorcery that in this deck will usually fetch you at least five lands.

I'd also add some sacrifice outlets such as Goblin Bombardment, Ashnod's Altar, Altar of Dementia, Breeding Pit, High Market, maybe even Skullmulcher, three of them should be good enough. Being able to kill your elementals on command in order to trigger Omanth is crucial.

You may have troubles with flyers so I'd swap Molten Disaster for Chain Reaction, in multiplayer it will be like a second Blasphemous Act.
Ulvenwald Hydra will also be a nice response to flyers. It isn't an elemental but it still synergizes greatly with the deck mechanics. I also like Cloudthresher and Tornado Elemental to fight those pesky flyers.

Spitebellows is a good removal for an Omnath deck, when yopu evoke it you can get a lot of triggers for just three mana.

I'm starting to like a lot Mouth / Feed, it's almost a second Shamanic Revelation that has some use on the early game giving you a 3/3 body to block with, not too shabby.