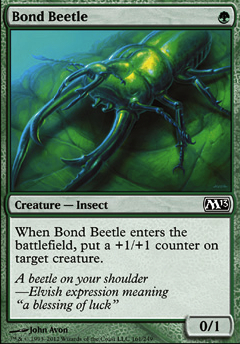 When Bond Beetle enters the battlefield, put a +1/+1 counter on target creature.

The Leviathan (Active)
by munky702

Soul of the Eldrazi
by Quizzler 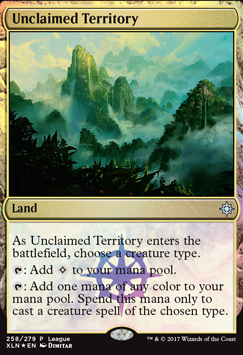 Animar rhymes with Aggro
by Yylon 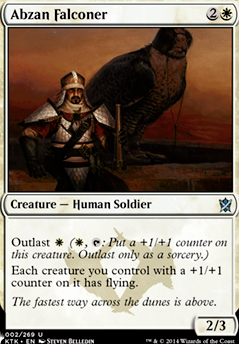 The Party Animar Has Arrived

Bond Beetle lets you get a 2nd counter on Animar when he comes out. Highly recommend him.

I am in agreement with Last_Laugh. This curve should be well below 4, if not below 3.

The only spells casts with a target are instants and sorceries that have the word "target" on them and auras always target the relevant permanent when cast. There might be exceptions to this general rule, but none I can think of right now.

Even if Bond Beetle's ability were an on cast ability like Ulamog, the Ceaseless Hunger's ability, it would still be an ability, not a spell, which Phalanx Leader is looking for.

If I cast a Bond Beetle while Phalanx Leader is out, and target phalanx leader, would leader's effect trigger? I'm worried about how beetle's ability activates on ETB rather than on cast.

Caerwyn on What counts as a Spell ...

Please remember to link your cards with double brackets:

A spell is any card that is on the stack. Gargos cares about spells that specifically target it. So, thatâs targeted instants ( Lightning Bolt ), targeted sorceries ( Grapeshot ), and Aura spells, which always target when they are a spell.

For your specific examples:

JMCraig was pretty thorough with his suggestions, so I probably don't have much to add.

Just to clarify, judging by the banned list your shop goes by I'm assuming that you play 1v1 duel commander, not 4 person pod games, right? Which format you are playing in is an important bit of info because there are significantly different meta considerations to make between the two formats.

As baseline suggestions for right now, I agree with JMCraig's suggestions that you need to include all of the 1 mana dork elves because they are important for increasing your chances of getting Animar out turn 2, but they are also one of the signature advantages that green has in Duel Commander. In a format where the best artifact ramp has been taken away from other colors, green's natural ability to ramp itself is one of its best assets.

I also agree that if you are running Kiki, you should also include Pestermite to increase the combo's consistency. With the inclusion of the mana elves and Pestermite it may be worth looking at running Priest of Titania as well.

In regards to Bond Beetle , I'm going to copy and paste a comment that I wrote elsewhere:

"In general, the way I find Animar usually plays out is that you want to ramp turn 1, cast Animar turn two, spend turn 3 casting two or three creatures to get counters on Animar but you run out of mana, then on turn 4 you are set up to potentially combo off. The power of Bond Beetle is that if you cast it as your first creature on turn 3 and have both a 3 CMC tutor creature, along with something else you can cast for free like Cloud of Faeries or Phyrexian Revoker, that should leave you with 2 available mana and 4 counters on Animar, which is potentially enough to win on turn 3 instead of turn 4 if you are lucky."

Honestly though, I'm not very knowledgeable about the current state of the duel commander meta. I remember that Red became a lot more viable when the life total was dropped to 20, but since your shop uses 30 life I'm not sure how much Red shows up. Red's burn spells and cheap board sweepers are a real problem for Animar since it gets around Animar's protection from White and Black, which normally keeps it safe from most spot removal in the usual cEDH format. If Red is an issue at your store, it may require some alternative design decisions to help you get the best out of Animar.