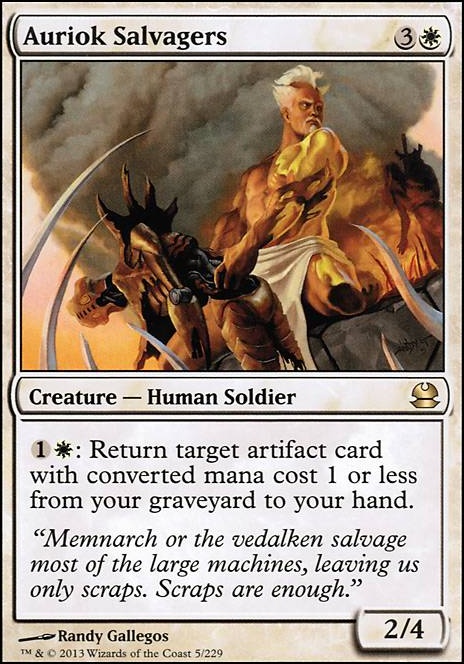 {1}{W}: Return target artifact card with converted mana cost 1 or less from your graveyard to your hand.

Auriok Salvagers occurrence in decks from the last year

Free Drinks for Life
by Beacha

Atraxa, the Swifty
by tarkington 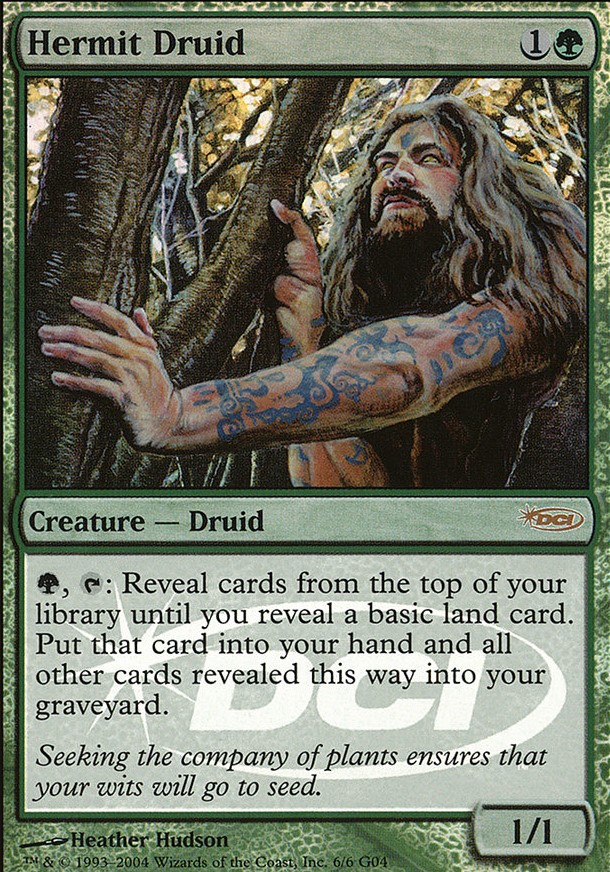 Thanks SkinCollector! The only reservation I have is not including an infinite mana combo like: Power Artifact Grim Monolith or Auriok Salvagers Lion's Eye Diamond to draw my deck with Thrasios, Triton Hero.

I'm not sure what I would take out, but I would also have to add Enlightened Tutor to assist in finding.

[cEDH Primer] Hail to the King

Kradz So essentially you need 3 mana to start the combo, . When Dockside Extortionist comes down you need a minimum of 4 treasure. Sac our boy to Razaketh (-2 Life) and tutor up Lion's Eye Diamond cast it. Pay (-4 Life lost now). Cast Dockside again and get 4 more treasure (6 Treasure at this point). Cast LED. Sac Dockside for Auriok Salvagers (-6 Life lost now). -8 life + and cast dockside for 8 treasure. -10 Life, Sac Dockside for Force of Will . -12 Life , get him back cast 1 more time for 10 treasure. Cast Auriok Salvagers. Start your infinite mana Bombmerman combo with LED and Auriok. Sac dockside once more (-14 life), find silence and cast it. Deck your opponents out using your generals draw ability.

cgomes, yeah it's to grab Dockside Extortionist + Temur Sabertooth , and I'm debating adding back Bomberman combo, so an additional hulk pile could go like Auriok Salvagers and Goblin Engineer . I'm still toying with the idea, and this list isn't really set in stone yet.

Joe_Ken_: Yeah, the boros counterspell stuff is due to my playgroup (and the cEDH community in large) being very blue heavy. But if your playgroup doesn't play a huge amount of control then more power to you.

I run Conjurer's Bauble primarily as a way to recur lost combo pieces. White white can kind of do it, I like bauble as it acts not only as a cantrip but also forms a recursion loop with Auriok Salvagers (and a combo loop if you include Lion's Eye Diamond ). Objectively its ok, but subjectively I really like the card.

As for Umezawa's Jitte , it's basically just repeatable removal. It's great for killing mana dorks/stuff that's causing you issues and it also turns Aurelia into a 3 hit clock since you can give her +4/+4 every time she connects.

I would love to get people's opions about some changes I am wanting to make to my Thrasios and Tymna deck:

For a while I have been running the bomberman combo with a Birthing Pod deployment line, however I have been finding it a bit underwhelming. So I am thinking of making the following changes:

I would love to get people's thoughts on the propsoed changes, as well as any other suggestions in general.

Rings of Brighthearth does not work with Narset, Enlightened Master , not sure if thatâs why itâs there or if itâs for some other purpose. It seems like youâre right on target with most lists Iâve seen. I too am running a competitive Narset, Enlightened Master deck with Enter the Infinite + Omniscience combo into Approach of the Second Sun . Auriok Salvagers seems odd, what is itâs purpose?

Breya is always an interesting deck. I personally like the infinite-mana options; repeatedly casting Breya, then sac-ing her and one of the thopters to bolt an opponent results in game over immediately. I see three ways that are easiest to achieve that goal.

First, the bomberman combo: Auriok Salvagers with Lion's Eye Diamond . LED is an infamously expensive card though, so the other two may be easier to get ahold of.

Second, reanimated dragon combo: Worldgorger Dragon with Animate Dead , Necromancy , Dance of the Dead , or any other reanimating enchantment. The Worldgorger (which is reanimated from the yard) trigger exiles the reanimation enchantment, which lets it die, which returns the enchantment, which brings back the dragon... tapping all your lands/mana rocks for mana when they flicker in results in infinite mana. You really need another creature to target to end the loop, but it isn't too difficult to make sure this is the case.

Third, Dramatic Reversal with Isochron Scepter . You'll need 3+ mana from the rocks, but that also shouldn't be too hard.

Note that combos 1 and 2 accommodate Entomb effects as a tutor. So if you want to run those combos, Entomb , Buried Alive and/or Faithless Looting and the like are your friends. Note also that 1 and 2 generate infinite ETB triggers. Pairing them with Altar of the Brood allows you to win even if your commander has been countered or removed to oblivion. Furthermore, running Sculpting Steel or Phyrexian Metamorph to copy Sharuum the Hegemon creates a loop where you sac one to the legend rule and then bring back either the original or copying artifact. That also generates infinite ETB triggers, and is a pet combo of mine.

I strongly advise tutors outside the transmute ones. Demonic Tutor , Vampiric Tutor , Imperial Seal , Enlightened Tutor , Reshape , Whir of Invention , Gamble and Transmute Artifact are all in your colors (though some are more easily obtained than others). These will increase your deck's consistency, regardless of whether you decide to use the combo-build.

Depending on your deck's budget, you might want to consider your mana base as a work-in-progress. Slow Fetches like Rocky Tar Pit and Flood Plain are well under a dollar, and work well enough as a replacement for Bloodstained Mire or Flooded Strand . Mana Confluence and City of Brass are also powerhouses in a 4-color deck. You should at least consider Forbidden Orchard .

I advise Swords to Plowshares over Path to Exile . Ramping your opponent is especially dangerous in EDH, but the life-gain is typically not relevant.

Ramp is important in any EDH deck. Mind Stone is a good addition, along with Ancient Tomb . I typically don't care for 3-mana rocks, but Chromatic Lantern is good in 4- or 5-color decks. Izzet Signet is a good idea in addition to the other two signets you're running. Non-blue ones aren't nearly as good, but if you really need another, I advise Orzhov Signet over Boros Signet or Rakdos Signet . Sculpting Steel and Phyrexian Metamorph are good ways to copy opponents' rocks as well as your own, or even creatures in the case of the metamorph. Copy Artifact is another option.

Because you're in black, you have access to some real good card draw. Phyrexian Arena and Staff of Nin are good as permanent sources of card-advantage. Ambition's Cost , Ancient Craving , Painful Truths and Chart a Course are all good ways to draw cards as well.