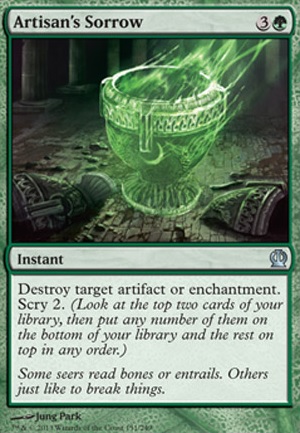 Im not really sure what to suggest for this deck.

Phytoburst is a fun one to play. I've enjoyed using it both in standard and now modern. I think Artisan's Sorrow is a bit better than Appetite for the Unnatural. It comes down to if you prefer scry or life gain really.

There has to be something better than Terrain Elemental you can put in here. Maybe a Battering Krasis or Aether Theorist.

First off it could be really useful to have a lot of the scry effect to help out your commanders ability. You could put in cards like Artisan's Sorrow, Crystal Ball, and Magma Jet.

The scry lands may also be useful, Example- Temple of Plenty

Firstly, 27 lands is not enough, especially in a three color deck. I would aim for 35-37 in this deck since you have 6 mana rocks.

If you are up for ordering cards, Command Tower should go in any commander deck with more than one color.

Evolving Wilds is exactly Terramorphic Expanse, but having both doesn't hurt for consistency.

Counterspell is strictly better than Cancel.

You are going to want Swiftfoot Boots to protect your commander and give it haste.

There are 2 different ways you can go about building the deck.

Either way is valid and enjoyable, it just depends on who you play with and how you like to play.

For either one though, you need more big creatures for Mimeoplasm's second targer for counters. Some good cheap options are Krosan Cloudscraper and Ghoultree. Inkwell Leviathan and Gaea's Revenge can be used as targets for the first or second ability.

Terastodon can be used as removal and then as counters later in the Mime.

Firstly, Gifts Ungiven is banned in commander. If you are playing casually it shouldn't be too big a deal, but I thought I'd let you know.

Metallic Rebuke is not very good here because the only non-creature artifacts you have produce mana, so you can't really use the improvise that often.

I don't know if you are going for a recursion theme, but generally in this deck you want your creatures to stay in the graveyard, so Wander in Death, Fortuitous Find, and March of the Drowned don't seem very good in this deck. A little bit of recursion is good in any deck, but this is too much.

Cankerous Thirst, Artisan's Sorrow and Gilt-Leaf Seer look rather weak to me, i suggest cutting one of these.

May i suggest Artisan's Sorrow and Brainstorm to line up the big baddies to flip?