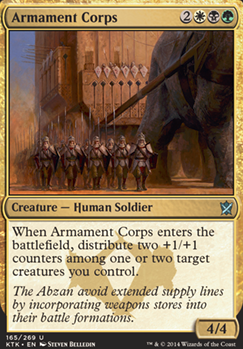 When Armament Corps enters the battlefield, distribute two +1/+1 counters among one or two target creatures you control. 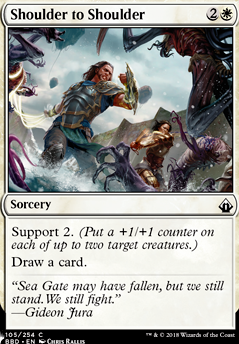 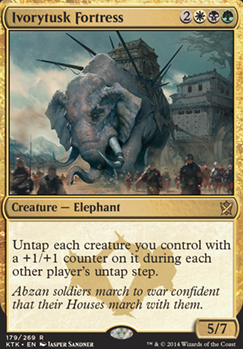 Colossus of Akros in plaats van Spread the Sickness

Abzan All for One and One for All

In case you didn't know your deck is not standard. Standard format is made of the most recent sets, in this case Khans of Takir forward. If you are wondering what cards are not currently in deck not legal, there is a link below just below the prices that says "Show illegal cards in boards". You should change your deck type from standard to modern or casual if its just for fun. Just be warned that if you want to make this deck standard about half of it is going to fall out in a month. Khans and Fate Reforged fall out after the 2nd.

As for card suggestions, the enchantment Hardened Scales would greatly help as it causes most your +1/+1 counter placing cards spin up at game changing paces.

I would suggest taking out Armament Corps as they are a slow card that ability is not really worth its mana.

Also suggest taking out Incremental Growth because it is also slow to cast as you need to target 3 separate creatures, meaning if you don't have enough targets it either can't be cast or you need to target your opponents creatures as some of the targets. Another problem with the spells is that if one of the targets gets removed the spell will fizzle and have no effect.

I would suggest putting in more Abzan Charms as this card does so much for the deck that it should be played at 4.

Avatar of the Resolute 2 mana for a 3/2 that has trample and reach is already great value, but adding in its ability to get larger when it enters because of creatures you controlling having +1/+1 counters makes it good to play at most points of the game.

Relief Captain The strongest support creature for its mana you can choose to play. I would suggest replacing Saddleback Lagac as the captain is stronger in every aspect except it requiring double white to cast.

Best of luck with the deck. If you want more suggestions I can offer more pending on what you want to do with the deck, because like I said this deck if tweaked only slightly will still fall out in a month.

If you consider Dromoka to be Abzan enough, I'd suggest looking into the Bolster mechanic. Echoes of the Kin Tree can be a good mana sink for later in the game and can provide more +1/+1 counters than High Sentinels of Arashin. Gleam of Authority makes a creature a flightless version of High Sentinels of Arashin but with the ability to attack and boost during the same turn. Scale Blessing might also be worth looking into as it gives a creature a +1/+1 counter then puts another counter on each creature you control with a counter on it.

I think you might want to remove Kin-Tree Warden, it doesn't generate counters, or provide buffs to creatures with counters. I'd say cutting 2 5CMC cards, like an Incremental Growth and the singleton Armament Corps, in addition to the Warden, and adding in 3 copies of Dromoka's Command will help lower your mana curve a bit. Also, the Command can still provide a +1/+1 counter, in addition to performing other functions, which gives you a bit of versatility. You may also want to remove a card or two from your 4CMC slot and increase the 2 drops you have, or add in an additional Dromoka's Command.

Your lands look pretty good. I would suggest upping Sandsteppe Citadel to 4, then run one each of Scoured Barrens, Jungle Hollow, and Blossoming Sands. If you're going to be running taplands, might as well max out on the most effective one at your disposal. I'd keep the basic lands where they're at, you seem to have a good amount for hitting your turn 1 and 2 drops.

This deck looks like it will be fun to play, and a pain to fight against.