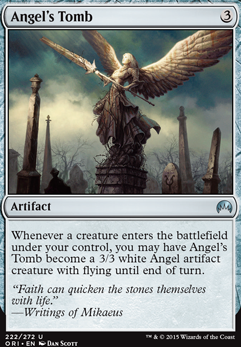 Whenever a creature enters the battlefield under your control, you may have Angel's Tomb become a 3/3 white Angel artifact creature with flying until end of turn.

Rise of Angels
by FrozenPsy 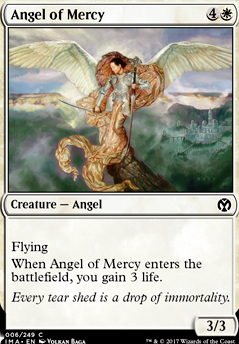 Looking at cards as Angel's Tomb, Scroll of Avacyn and Staff of the Sun Magus to improve the Angel and Life gain theme. Maybe even Defy Death

Also does Angel's Tomb interact with Angelic Accord?

This is better advice than I was expecting. So. Sincerely, thanks for it. =)

Building and playing decks with a lot of single copies is something I'm used to and familiar with, many of my decks have various ways to play it due to my not having several copies of almost all the cards in a deck. Its hard to explain, but there is usually a varied way to play the deck based on how it comes up. This makes the deck a little less predictable. Though I'm still working on that trait for this one.I've never really been a fan of decks with many 4 offs, to me those decks seemed geared toward a single strategy or combo, there's less variety and challenge to playing a deck like that for me. A few of My decks usually have multiple strategies, and the less predictable outcome of each game challenges me to play on the fly.

I would like to keep as many Angel types as possible. Angelic Page, is in there for early-game defense mostly. Decree of Justice, I don't even use the ability to create soldier tokens. I've even debated using a few copies of Illusory Angel, just to have some Angel type creatures early game.

I do plan to cut Angel's Tomb and Angelic Armaments for two more copies of Quicksilver Amulet. Ways to reduce the CMC, like Herald of War or a couple copies of Helm of Awakening. I haven't decided yet, depending on how it plays with the amulets. I'm also looking to replace Moonlit Wake with Proper Burial.

The Kaldra artifacts are actually in there for Guardian of the Gateless, Sigarda's Aid allowing me to spend the eight mana I'd need to play and equip one, to have both equipped. The Flash ability isn't one I really take advantage of too often, but having it open comes in handy.

I will, however, be adding Archangel of Tithes and Emeria, The Sky Ruin. I wasn't even aware a land card had that ability. Might even add Vault of the Archangel, to help with life gain.

I honestly do appreciate the feedback, I just wish there were more low-casting cost Angels to use.

Journey to Nowhere is much better than Silkwrap. Resupply should be something like Linvala, the Preserver instead. Reaper of Flight Moonsilver is pretty bad. I'd rather use Guardian Seraph or Seraph of the Sword in place of it and a few other of the weaker ones. You also need to run at least 24 lands if you want a chance of casting the higher-costed angels in your deck. I'd remove the True-Faith Censer, Tower of Eons, and the Angel's Tombs for more land. Gods Willing is strictly better than Stave Off in here too. Hopefully some of that helps. It looks like a fun casual deck that I would play back when I didn't play competitively. Have fun!

Me no Like Angel's Tomb. Replace with Grab the Reins.