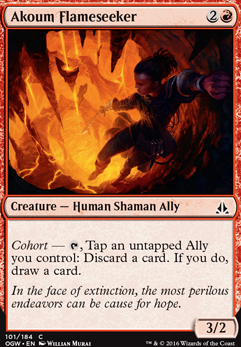 Cohort â , Tap an untapped Ally you control: Discard a card. If you do, draw a card. 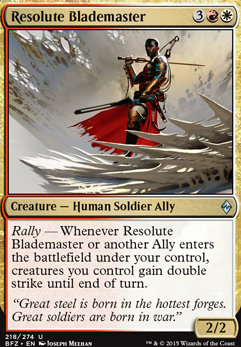 The Sheer Madness!!!
by Faidian 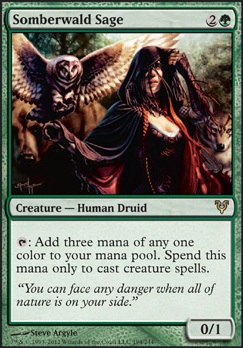 If you have it, Akoum Flameseeker Could also be good (Above average attack and card draw with allies).

Maybe with Insolent Neonate or Tormenting Voice and Fiery Temper for a minor discard theme. (In which case, I'd remove all green cards and look at Kalastria Healer as another angle of attack in a RB Allies deck.)

I really want to like Grovetender Druids, but because of the cost of its ability, I can't. Also, you can easily end games with Resolute Blademaster.

If you have Deadeye Navigator soulbound to Harabaz Druid and control Chasm Guide, you can generate an infinite amount of

mana and have an infinite amount of ETB triggers. It can also be very useful soulbound to General Tazri, allowing you to search for an ally for a measly

. (If the Navigator is too expensive, you can use Nephalia Smuggler, but to lesser effect). Since you don't really have anything to make land creatures, Halimar Tidecaller is really just kind of useless here in my opinion.

Hagra Diabolist may not let you gain life, but you can easily end games with it.

I know that it is a very minor suggestion, but I think that the Lens is better because it has the same second ability and adds mana for free with its first

It may be worth a little more, but Chromatic Lantern will fix any color-related mana problems with ease

Mind Control is a very useful card, but I think that Conspiracy allows you to do a lot more with the Ally tribal theme, letting you tutor for Deadeye Navigator with Tazri and even being part of the infamous Turntimber Ranger combo. If that is worth too much, you can use Xenograft instead, but to lesser effect.

Though it may cost more mana, creature removal is always nice

This part is up to you, and that is other forms of removal that do not involve ETB effects, such as Return to Dust, Ironwright's Cleansing, Devout Chaplain, Revoke Existence, Ruinous Path, Hero's Downfall, Murder, Doom Blade, Smelt, Demolish, Fiery Confluence, Consign to Dust, Creeping Mold, Deconstruct, Fade into Antiquity, etc. I have a Brago, King Eternal (who would go nicely in this deck as well) commander deck, and I have played against opponents who play things like Torpor Orb and Hushwing Gryff, and it is living hell when your deck relies on ETB effects and that comes into play. I do not know what people in your group usually play, but if I were your opponent and heard that you were making an ally deck, I would definitely include at least Torpor Orb, so I would be sure to include some form of removal to deal with these threats.

I hope that I helped, and good luck!

I have no other allies in the deck to make Akoum Flameseeker work well, and even if I did I don't think tapping two creatures to rummage is worth it. The deck has enough discard outlets right now, so I'll pass on the Flameseeker. Thanks for the suggestion, though.

Akoum Flameseeker might be a good idea, sadly Rummaging Goblin is not standard

HeavyR JMoneyNash I appreciate the suggestions. I think that Firemantle Mage makes a great fit in here. I like Akoum Flameseeker because I can discard creatures and use March from the Tomb to get multiple allies out at once. I would really like to make room for Veteran Warleader. Need to test this out some more.Thanks again!