Hello everyone! Welcome back to Pattern Recognition! This is TappedOut.net's longest running article series. In it, I aim to bring to you each week a new article about some piece of Magic, be it a card, a mechanic, a deck, or something more fundamental or abstract. I am something of an Old Fogey and part-time Smart Ass, so I sometimes talk out my ass. Feel free to dissent or just plain old correct me! I also have a Patreon if you feel like helping out.

So, today's article comes to you because I bought a box of Magic Origins. It was sitting on the shelf of my FLGS for a while now and now that they are back open, I decided to help support them by helping to clear out their old stock so they can afford to buy new stock and have room for it.

Now, as I was collating my cards, I kept running across the three mechanics from Magic Origins. Prowess was a mechanic that my eyes sorta slid over, even though it's come back in Core 2021. The other mechanic was Renown and yeah, even I can't say much about that.

But Spell Mastery stuck with me, and actually called up memories from the time the set was released and the discussions around it. And for those of you who don't know what it is, Spell Mastery is an Ability Keyword that changes a spell if you have two or more Instants and/or Sorceries in your graveyard when you cast the spell.

You know what, let me show you the example card that I saw that made this article click for me and cause a lot of discussion at the time. 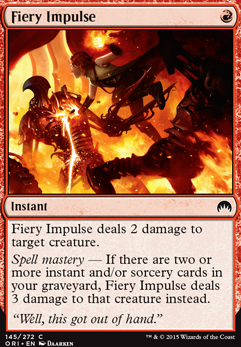 Not really that interesting, is it? Well, for starters, is shows one of the way that Spell Mastery works in that the damage from this card gets boosted if you've got other spells in the graveyard. In this case though, which really drove discussion at the time, was what this card did and how. And I'm going to digress into that discussion for a quick bit here.

In Wizard's development, Shock is a card that's slightly underpowered for what it does, just a hair though. Enough that they can print it in a Core Set with no issues as it's about the right power level for such a set. On the other hand, Lightning Bolt is too powerful. That single point of damage is a huge developmental gap that Wizards occasionally pokes at. A more recent version of this was Wizard's Lightning where you can conditionally cast a Lightning Bolt.

But this card was, I think, a successful way to go from the under-powered Shock to the overpowered Lightning Bolt.

But the real aspect about this ability that deserves talking about is the enabling condition. Namely, having two Instants or Sorceries in the graveyard. What makes this so self-serving as a mechanic is that Spell Mastery only appears on Instants and Sorceries. Every spell you cast with this ability makes sure that you reach that trigger condition sooner rather than later.

To note, Spell Mastery as part of the definition of the ability, requires two of more non-permanents in your graveyard. Which means that unless you're discarding cards as part of a Cycling or Madness aspect to your deck, you are already casting spells that matter.

OK, I don't think I'm getting my point across here, so let me back up for a moment.

One of the themes of Magic Origins was the idea of 'growing up', of becoming more powerful over time. The highlight of the set were the five Flip'Walkers, creatures that when certain conditions were met, would flip over into their Planeswalker versions for the initial five of the Gatewatch. (For the record, I got Kytheon, Hero of Akros  Flip and Chandra, Fire of Kaladesh  Flip.)

On the creature side of things, Renown was a mechanic that promoted attacking, making their creature bigger in the process and often granting other effects as well. But Spell Mastery showed your experience in casting spells. Your first couple of spells were not to their full power, but once you had a couple of practice spells under your belt, you were able to reach your best potential. And for the most part, these cards were representative of the five Planeswalker's and their developing powers thanks to the images on the cards showing the development as you go up in rarity.

But Spell Mastery isn't the first time this has shown up. It's not the first time that your graveyard is a binary enabler or disabler of effects on cards. In a few ways it's a modern implementation of Threshold.

Threshold is an older mechanic from the Odyssey block, but most recently printed as a serious thing in Modern Horizons. While printed as part of a Graveyard Matters theme for the block, something that deserves its own article in the future, by itself, Threshold represented a degree of inevitability to the game.

To whit, it was the enabling of the idea that as the game went on longer, your spells could become more powerful. Now, it wasn't presented as such, but in practice, it rewarded determination and not a little bit of fueled sacrifice and madness.

Now don't forget, this was Odyssey block. Getting seven or more cards in your graveyard actually required effort, and the cards to remove graveyards from play hadn't been printed yet (because Ravnica and the Dredge mechanic was still, what, three years out?) So seven cards represented not only a substantial investment in time, but in resources to get the most out of your Threshold cards.

But when you compare the two mechanics, there are two major points of divergence. Once where Spell Mastery is better, and one where Threshold is the superior choice.

For the first, it is that Spell Mastery only requires two cards of a type you're already playing to be in the graveyard. You're playing cards with the mechanic, and you use them, so they fuel the mechanic. It is not inconceivable to have Spell Mastery triggered on turn 3 if you're really putting effort into it. It's self-contained as a mechanic, and this is where it shines.

On the other side of things, Threshold has two advantages that are really two sides of the same thing. Namely, Threshold doesn't care about card types. Your graveyard could be full of lands or enchantment or artifacts for all it cares. All it wants to see is seven or more cards in your graveyard. And on the flipside, Threshold can go onto ANY card type. From the artifact Otarian Juggernaut to Lands like Nantuko Monastery to creatures like Krosan Avenger to enchantments like Kamahl's Desire to even Instants and Sorceries. Demoralize and Cleansing Meditation.

But both are binary effects. You either have them or you don't. It's simple like that, as much like Ascend, once it's active, it's active (barring graveyard shenanigans). I would say that there is no real practical difference between which is easier to check, and as the game advances, I'm pretty sure that both are equally easy to enable, especially in older formats where the graveyard is something to be filled and to be used.

Of the two though, I think honestly it's Threshold that's better in the long run. Yes, it requires a bit more effort to activate, but that it appears on more card types is what sells it to be as being better than Spell Mastery.

But there is another thing about Spell Mastery that I haven't overlooked yet. I wanted to tell you about it first by itself. When I talked about the mechanics of Origins, I mentioned one of the other ones that tended to drop under my radar for the most part, but something that was put into the Core Set, I think, to help make Spell Mastery better.

I'm talking about Prowess. Another mechanic that deserves its own article, this deciduous ability is one that gives a creature +1/+1 until the end of the turn for each Instant or Sorcery cast by that player so far this turn. And what is Spell Mastery, but the encouraging of playing those types of cards?

The intended interaction of the two mechanics was there, much like how Strive and Heroic from the Theros block were intended to interact. A nice synergy that while it worked, never really materialized.

You know, I wouldn't mind seeing a deck built around these mechanics, but I'm not sure Spell Mastery is up to the task. We have my lovely Elsha of the Infinite

from last year's Slow Grow league or Shu Yun, the Silent Tempest to act as a Commander. And looking at all the Spell Mastery cards from Origins (and reprints), I don't see anything here that really pops or stands out as something that would be deck-worthy, even in Pioneer.

That's right, I, a self-professed VORTHOS player couldn't find it in myself to have fun with this. Prowess? Sure have! Threshold? Hell yeah. Spell Mastery? ... eh... meh?

Spell Mastery goes onto my list of mechanics we need more examples of. Not just because I'm a fan of breathing life into old mechanics. Because holy shit, PHASING CAME BACK?!?!? And if Phasing got a shot in the arm, who's to say that something less mechanically complex as Spell Mastery can't?

Because even I know Banding is a dead end, sadly.

Sorry for the short article, work is ... interesting to say the least. Join me next week when I talk about something hopefully a little more in-depth.

Until then, please consider donating to my Pattern Recognition Patreon. Yeah, I have a job, but more income is always better. I still have plans to do a audio Pattern Recognition at some point, or perhaps a Twitch stream. And you can bribe your way to the front of the line to have your questions, comments and observations answered!

"But this card was, I think, a successful way to go from the under-powered Shock to the overpowered Lightning Bolt."

It is a perfectly balanced card

While I appreciate your analysis of Fiery Impulse, it must be pointed out that unlike Shock and Lightning Bolt, it only hits creatures, which is a hugely significant functionality difference.

xtechnetia: facepalm How did I miss that?

Haha, no worries, it happens to the best of us. I appreciate your content regardless!

It wasn't a mechanic but in Odysey Block we had also cards like Muscle Burst which highlighted the idea of 'growing up'.

xram666: There's actually an article in the works that highlights that exact not-quite-a-mechanic. Notably because we keep getting it on occasion, including in the past year.

in all seriousness, I have a proposal:

Deal 3 damage to target creature or planeswalker (not player)